Two Civil Wars: The Curious Shared Journal of a Baton Rouge Schoolgirl and a Union Sailor on the USS Essex (Hardcover) 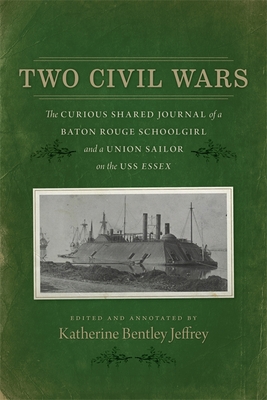 Two Civil Wars is both an edition of an unusual Civil War--era double journal and a narrative about the two writers who composed its contents. The initial journal entries were written by thirteen-year-old Celeste Repp while a student at St. Mary's Academy, a prominent but short-lived girls school in midcentury Baton Rouge. Celeste's French compositions, dating from 1859 to 1861, offer brief but poignant meditations, describe seasonal celebrations, and mention by name both her headmistress, Matilda Victor, and French instructor and priest, Father Darius Hubert.
Immediately following Celeste's prettily decorated pages a new title page intervenes, introducing An Abstract Journal Kept by William L. Park, of the U.S. gunboat Essex during the American Rebellion. Park's diary is a fulsome three-year account of military engagements along the Mississippi and its tributaries, the bombardment of southern towns, the looting of plantations, skirmishes with Confederate guerillas, the uneasy experiment with contrabands (freed slaves) serving aboard ship, and the mundane circumstances of shipboard life. Very few diaries from the inland navy have survived, and this is the first journal from the ironclad Essex to be published. Jeffrey has read it alongside several unpublished accounts by Park's crewmates as well as a later memoir composed by Park in his declining years. It provides rare insight into the culture of the ironclad fleet and equally rare firsthand commentary by an ordinary sailor on events such as the sinking of CSS Arkansas and the prolonged siege of Port Hudson.
Jeffrey provides detailed annotation and context for the Repp and Park journals, filling out the biographies of both writers before and after the Civil War. In Celeste's case, Jeffrey uncovers surprising connections to such prominent Baton Rouge residents as the diarist Sarah Morgan, and explores the complexity of wartime allegiances in the South through the experiences of Matilda Victor and Darius Hubert. She also unravels the mystery of how a southern youngster's school scribbler found its way into the hands of a Union sailor. In so doing, she provides a richly detailed picture of occupied Baton Rouge and especially of events surrounding the Battle of Baton Rouge in August 1862.
These two unusual personal journals, linked by curious happenstance in a single notebook, open up intriguing, provocative, and surprisingly complementary new vistas on antebellum Baton Rouge and the Civil War on the Mississippi.

Katherine Bentley Jeffrey is a freelance editor and writer, and an independent scholar.

This feature require that you enable JavaScript in your browser.
END_OF_DOCUMENT_TOKEN_TO_BE_REPLACED

This feature require that you enable JavaScript in your browser.
END_OF_DOCUMENT_TOKEN_TO_BE_REPLACED

This feature require that you enable JavaScript in your browser.
END_OF_DOCUMENT_TOKEN_TO_BE_REPLACED