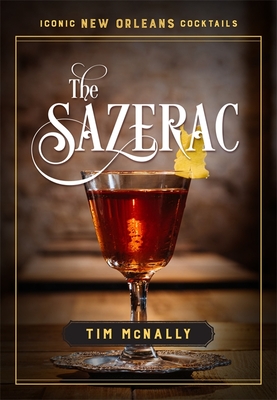 The Sazerac ranks among the most famous drinks of a city famous for its drinking, but where did the classic New Orleans cocktail originate? Drinks journalist Tim McNally dives into the history of the Sazerac in a lively chronicle that ranges from a family-owned Cognac company in France, to an ingredient created by a New Orleans pharmacist, to a spirit once banned on three continents, to the renowned Playboy Clubs of the 1970s, which helped revitalize the enjoyment of complex, elegant mixed drinks. Among the many significant developments in the life of the Sazerac was its designation in 2008 as the official cocktail of the city of New Orleans.

When the Sazerac made its first appearance in the mid-1800s, the very concept of a cocktail (though not the word) was still new. Bartenders did not spend much time combining multiple ingredients for a single drink, and when they did, they felt no impulse to give it a name. But the Sazerac was unique. It combined a specific Cognac named Sazerac de Forge et Fils with Creole pharmacist Antoine Peychaud's much-beloved brand of bitters, plus a sugar cube--all of which were stirred and strained into a drink glass coated with absinthe. The making of the drink provided the comfort and enjoyment of a social ritual, and the Sazerac became both a delicious beverage in its own right and a marker of the city's unique alcohol culture. With a spirited blend of history, cocktail trivia, and recipes, The Sazerac uncovers the true story of one of New Orleans's most long-lived and iconic beverages.

Tim McNally is the wine-and-spirits editor and a feature writer for New Orleans Magazine; author of the weekly column "Happy Hour" at myneworleans.com; and host of The Dine, Wine, and Spirits Show on New Orleans radio station WGSO.

This feature require that you enable JavaScript in your browser.
END_OF_DOCUMENT_TOKEN_TO_BE_REPLACED

This feature require that you enable JavaScript in your browser.
END_OF_DOCUMENT_TOKEN_TO_BE_REPLACED

This feature require that you enable JavaScript in your browser.
END_OF_DOCUMENT_TOKEN_TO_BE_REPLACED