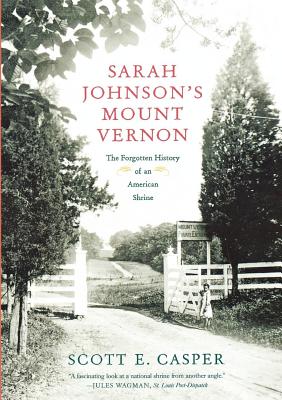 Sarah Johnson's Mount Vernon brilliantly restores the lives and contributions of African Americans to the legacy of Mount Vernon. Digging beneath the well-known stories of George Washington and the era of America's birth, Scott E. Casper recovers the remarkable history of Sarah Johnson, who spent more than fifty years at Mount Vernon, in slavery and after emancipation. Through her life and those of her family and friends, Casper provides not only an intimate picture of Mount Vernon during the nineteenth and early twentieth centuries—years that are rarely part of its public story—but also a window into a community of people who played an essential part in creating and maintaining this American landmark.

Scott E. Casper is a professor of history at the University of Nevada, Reno. He is the author of Constructing American Lives, which won the 1999 Book History Prize from the Society for the History of Authorship, Reading, and Publishing.

“A fascinating look at a national shrine from another angle.” —Jules Wagman, St. Louis Post-Dispatch

“Now, at last, Casper tells the story of the invisible men and women who worked the 8,000-acre riverfront estate for generations. While innumerable books have been written in recent years about the Founding Fathers, it's refreshing to read one in which slaves play a central part . . . Casper deftly uses the limited sources available to depict Johnson's life with an authenticity that is moving.” —W. Ralph Eubanks, The Washington Post Book World

“Casper must piece the prism together from many sources . . . The efforts pay off. His account is evenhanded and scrupulously detailed, yet always emotionally connected to the life of housekeeper Sarah Johnson.” —Erin Aubry Kaplan, Los Angeles Times

This feature require that you enable JavaScript in your browser.
END_OF_DOCUMENT_TOKEN_TO_BE_REPLACED

This feature require that you enable JavaScript in your browser.
END_OF_DOCUMENT_TOKEN_TO_BE_REPLACED

This feature require that you enable JavaScript in your browser.
END_OF_DOCUMENT_TOKEN_TO_BE_REPLACED