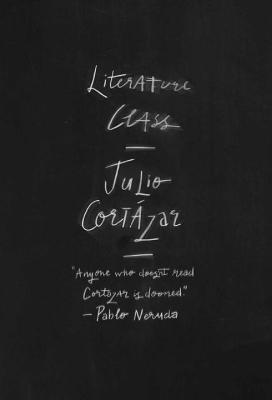 A master class from the exhilarating writer Julio Cortázar

“I want you to know that I’m not a critic or theorist, which means that in my work I look for solutions as problems arise.” So begins the first of eight classes that the great Argentine writer Julio Cortázar delivered at UC Berkeley in 1980. These “classes” are as much reflections on Cortázar’s own writing career as they are about literature and the historical moment in which he lived. Covering such topics as “the writer’s path” (“while my aesthetic world view made me admire writers like Borges, I was able to open my eyes to the language of street slang, lunfardo…”) and “the fantastic” (“unbeknownst to me, the fantastic had become as acceptable, as possible and real, as the fact of eating soup at eight o’clock in the evening”), Literature Class provides the warm and personal experience of sitting in a room with the great author. As Joaquin Marco stated in El Cultural, “exploring this course is to dive into Cortázar designing his own creations.… Essential for anyone reading or studying Cortázar, cronopio or not!”

Julio Cortázar (1914-1984), Argentine novelist, poet, essayist, and short-story writer, was born in Brussels, and moved permanently to France in 1951. Cortazar is now recognized as one of the century's major experimental writers, reflecting the influence of French surrealism, psychoanalysis, and his love of both photography and jazz, along with his strong commitment to revolutionary Latin American politics.

One of those books that radically shifted my thinking about the possibilities of narrative.
— Christopher Higgs - Big Other

Literature Class is a serious boon for Julio Cortázar fans. Delivered at the end of his life while visiting UC Berkeley, these eight lectures offer fresh insights into the mind of one of the 20th Century’s most vital writers.

"There's no question that Julio Cortázar is among the most revered Latin American writers of any age. In Literature Class, readers are treated to a series of talks the author gave at Berkeley circa 1980. They range from meditations on the writer's path to the elements of an effective short story. "I'm not a critic or theorist," he writes, "which means that in my work, I look for solutions as problems arise." While this may be true, it's hard to imagine anyone better suited to tackle the endless possibilities of literature and language itself."

The consequent lectures—originally delivered in Spanish and translated
adeptly by Katherine Silver—are erudite, intimate, charmingly
fragmented, and anecdotal, covering a range of topics, from “Eroticism
and Literature” to “The Realistic Short Story.”
— Dustin Illingworth - The Atlantic

Based on the words spoken by Cortázar and his students, the class that
he taught appears to be an interesting hybrid of Cortázar as tour guide
of his body of work, and as mentor into the broader lessons about the
qualities of fiction that resonated most with him.
— The Culture Trip

As Cortázar stresses throughout his talks, writing is rarely a pursuit of answers but, rather, about investigation—of the self, of one’s work, and of the world at large. The goal of the novel, Cortázar says, is to harmonize its formal and literal questions into a central, destabilizing quandary: 'Why are things like they are and not otherwise?
— The New Yorker

[T]he
lectures, at times, do feel cobbled together—but in the best way, in
the way of art that thrives in complexity and contradiction. They are
made from pieces of Cortázar’s life, his writing, his experiences as a
young writer in Argentina and an as exile in Paris, his deep engagement
with literature and cinema and politics, and they show the mind of a
writer at work, asking questions and unearthing new possibilities.
— John Flynn-York - The Rumpus

A glittering showcase for a daring talent—Julio Cortázar is a dazzler.
— The San Francisco Chronicle

Cortázar spoke of something more than novelty or progress—he spoke of the radically new and joyful nature of every instant, of the body, the memory and the imagination of men and women.
— Carlos Fuentes

He was, perhaps without trying, the Argentine who made the whole world love him.
— Gabriel García Márquez

Anyone who doesn’t read Cortázar is doomed.
— Pablo Neruda

This feature require that you enable JavaScript in your browser.
END_OF_DOCUMENT_TOKEN_TO_BE_REPLACED

This feature require that you enable JavaScript in your browser.
END_OF_DOCUMENT_TOKEN_TO_BE_REPLACED

This feature require that you enable JavaScript in your browser.
END_OF_DOCUMENT_TOKEN_TO_BE_REPLACED