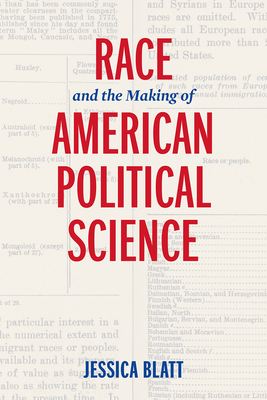 Race and the Making of American Political Science shows that changing scientific ideas about racial difference were central to the academic study of politics as it emerged in the United States. From the late nineteenth century through the 1930s, scholars of politics defined and continually reoriented their field in response to the political imperatives of the racial order at home and abroad as well to as the vagaries of race science.

The Gilded Age scholars who founded the first university departments and journals located sovereignty and legitimacy in a Teutonic germ of liberty planted in the new world by Anglo-Saxon settlers and almost extinguished in the conflict over slavery. Within a generation, Teutonism would come to seem like philosophical speculation, but well into the twentieth century, major political scientists understood racial difference to be a fundamental shaper of political life. They wove popular and scientific ideas about race into their accounts of political belonging, of progress and change, of proper hierarchy, and of democracy and its warrants. And they attended closely to new developments in race science, viewing them as central to their own core questions. In doing so, they constructed models of human difference and political life that still exert a powerful hold on our political imagination today, in and outside of the academy.

By tracing this history, Jessica Blatt effects a bold reinterpretation of the origins of U.S. political science, one that embeds that history in larger processes of the coproduction of racial ideas, racial oppression, and political knowledge.

This feature require that you enable JavaScript in your browser.
END_OF_DOCUMENT_TOKEN_TO_BE_REPLACED

This feature require that you enable JavaScript in your browser.
END_OF_DOCUMENT_TOKEN_TO_BE_REPLACED

This feature require that you enable JavaScript in your browser.
END_OF_DOCUMENT_TOKEN_TO_BE_REPLACED