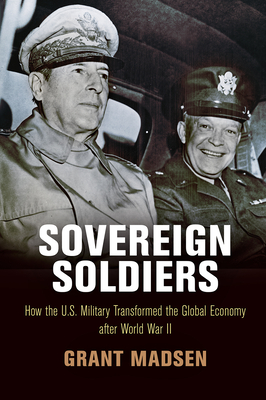 They helped conquer the greatest armies ever assembled. Yet no sooner had they tasted victory after World War II than American generals suddenly found themselves governing their former enemies, devising domestic policy and making critical economic decisions for people they had just defeated in battle. In postwar Germany and Japan, this authority fell into the hands of Dwight D. Eisenhower and Douglas MacArthur, along with a cadre of military officials like Lucius Clay and the Detroit banker Joseph Dodge.

In Sovereign Soldiers, Grant Madsen tells the story of how this cast of characters assumed an unfamiliar and often untold policymaking role. Seeking to avoid the harsh punishments meted out after World War I, military leaders believed they had to rebuild and rehabilitate their former enemies; if they failed they might cause an even deadlier World War III. Although they knew economic recovery would be critical in their effort, none was schooled in economics. Beyond their hopes, they managed to rebuild not only their former enemies but the entire western economy during the early Cold War.

This feature require that you enable JavaScript in your browser.
END_OF_DOCUMENT_TOKEN_TO_BE_REPLACED

This feature require that you enable JavaScript in your browser.
END_OF_DOCUMENT_TOKEN_TO_BE_REPLACED

This feature require that you enable JavaScript in your browser.
END_OF_DOCUMENT_TOKEN_TO_BE_REPLACED