The Rise and Fall of Jewish American Literature: Ethnic Studies and the Challenge of Identity (Jewish Culture and Contexts) (Hardcover) 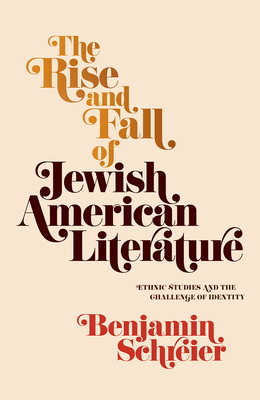 In a polemic against what he sees as the unexamined foundations and stagnant state of the field, Schreier interrogates a series of professionally powerful assumptions about Jewish American literary history--how they came into being and how they hardened into clich . He offers a critical genealogy of breakthrough and other narratives through which Jewish Studies has asserted its compelling self-evidence, not simply under the banner of the historical realities Jewish Studies claims to represent but more fundamentally for the intellectual and institutional structures through which it produces these representations. He shows how a historicist scholarly narrative quickly consolidated and became hegemonic, in part because of its double articulation of a particular American subject and of a transnational historiography that categorically identified that subject as Jewish. The ethnological grounding of the Jewish American literary field is no longer tenable, Schreier asserts, in an argument with broad implications for the reconceptualization of Jewish and other identity-based ethnic studies.

This feature require that you enable JavaScript in your browser.
END_OF_DOCUMENT_TOKEN_TO_BE_REPLACED

This feature require that you enable JavaScript in your browser.
END_OF_DOCUMENT_TOKEN_TO_BE_REPLACED

This feature require that you enable JavaScript in your browser.
END_OF_DOCUMENT_TOKEN_TO_BE_REPLACED