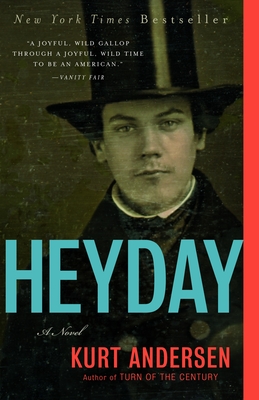 The year is 1848. It is a time of America's raucous coming of age. War with Mexico has just ended; gold has been discovered in California; revolutions sweep across Europe. Charles Darwin, Walt Whitman, Alexis De Tocqueville, and Matthew Brady are out and about.

Amid this excitement and commotion aristocratic Benjamin Knowles leaves the Old World to "find" himself in New York. There he befriends three restless Americans: Timothy Scaggs, a journalist and daguerreotypist; Duff Lucking, a fireman, and damaged veteran of the Mexican War; and Duff's freethinking and ravishing sister Polly, an aspiring actress. Together they set out on a transcontinental trip west, followed by a cold-blooded killer seeking revenge.

This is historical fiction at it's best, and also an affecting story of four people chasing their American dreams.

Heyday is a brilliantly imagined, wildly entertaining tale of America’s boisterous coming of age–a sweeping panorama of madcap rebellion and overnight fortunes, palaces and brothels, murder and revenge–as well as the story of a handful of unforgettable characters discovering the nature of freedom, loyalty, friendship, and true love.

In the middle of the nineteenth century, modern life is being born: the mind-boggling marvels of photography, the telegraph, and railroads; a flood of show business spectacles and newspapers; rampant sex and drugs and drink (and moral crusades against all three); Wall Street awash with money; and giddy utopian visions everywhere. Then, during a single amazing month at the beginning of 1848, history lurches: America wins its war of manifest destiny against Mexico, gold is discovered in northern California, and revolutions sweep across Europe–sending one eager English gentleman off on an epic transatlantic adventure. . . .

Amid the tumult, aristocratic Benjamin Knowles impulsively abandons the Old World to reinvent himself in New York, where he finds himself embraced by three restless young Americans: Timothy Skaggs, muckraking journalist, daguerreotypist, pleasure-seeker, stargazer; the fireman Duff Lucking, a sweet but dangerously damaged veteran of the Mexican War; and Duff’s dazzling sister Polly Lucking, a strong-minded, free thinking actress (and discreet part-time prostitute) with whom Ben falls hopelessly in love.

Beckoned by the frontier, new beginnings, and the prospects of the California Gold Rush, all four set out on a transcontinental race west–relentlessly tracked, unbeknownst to them, by a cold-blooded killer bent on revenge.

A fresh, impeccable portrait of an era startlingly reminiscent of our own times, Heyday is by turns tragic and funny and sublime, filled with bona fide heroes and lost souls, visionaries (Walt Whitman, Charles Darwin, Alexis de Tocqueville) and monsters, expanding horizons and narrow escapes. It is also an affecting story of four people passionately chasing their American dreams at a time when America herself was still being dreamed up–an enthralling, old-fashioned yarn interwoven with a bracingly modern novel of ideas.
"In this utterly engaging novel, the author of Turn of the Century brings 19th-century America vividly to life . . . While this is a long book, it moves quickly, with historical detail that's involving but never a drag on the action; the characters are beautifully drawn. A terrific book; highly recommended." –Library Journal
"Heyday is fuled by manic energy, fanatical research, and a wicked sense of humor.... It's a joyful, wild gallop through a joyful, wild time to be an American." -Vanity Fair

Kurt Andersen is the bestselling author of Evil Geniuses, Fantasyland and the novels True Believers, Heyday andTurn of the Century, among other books. He contributes to The New York Times and was host and co-creator of Studio 360, the Peabody Award–winning public radio show and podcast. He also writes for television, film, and the stage. Andersen co-founded Spy magazine, served as editor in chief of New York, and was a cultural columnist and design critic for Time, New York and The New Yorker. He graduated from Harvard College and lives in Brooklyn.

This feature require that you enable JavaScript in your browser.
END_OF_DOCUMENT_TOKEN_TO_BE_REPLACED

This feature require that you enable JavaScript in your browser.
END_OF_DOCUMENT_TOKEN_TO_BE_REPLACED

This feature require that you enable JavaScript in your browser.
END_OF_DOCUMENT_TOKEN_TO_BE_REPLACED