The Twelve Lives of Samuel Hawley: A Novel (Paperback) 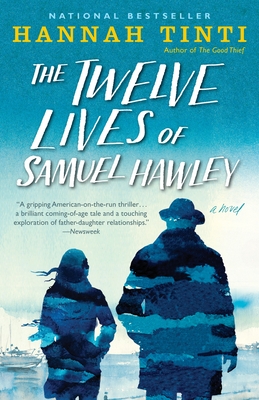 “Hannah Tinti has accomplished something rare in The Twelve Lives of Samuel Hawley: she has written a book too exciting to put down, but too well written to race through or, heaven forbid, skim. Her novel, however, is more than just a treat for those of us who love literary thrillers; it is also a provocative exploration of violence and the extremes to which men and women will go to defend those they love. Because Tinti is so good at what she does, it is virtually impossible for us, her readers, not to become complicit in the mayhem and to be left wondering, in the end, what we would do in her characters' places.”
— Ezra Goldstein (E), Community Bookstore, Brooklyn, NY

Samuel Hawley isn’t like the other fathers in Olympus, Massachusetts. A loner who spent years living on the run, he raised his beloved daughter, Loo, on the road, moving from motel to motel, always watching his back. Now that Loo’s a teenager, Hawley wants only to give her a normal life. In his late wife’s hometown, he finds work as a fisherman, while Loo struggles to fit in at the local high school.

Growing more and more curious about the mother she never knew, Loo begins to investigate. Soon, everywhere she turns, she encounters the mysteries of her parents’ lives before she was born. This hidden past is made all the more real by the twelve scars her father carries on his body. Each scar is from a bullet Hawley took over the course of his criminal career. Each is a memory: of another place on the map, another thrilling close call, another moment of love lost and found. As Loo uncovers a history that’s darker than she could have known, the demons of her father’s past spill over into the present—and together both Hawley and Loo must face a reckoning yet to come.

Praise for The Twelve Lives of Samuel Hawley

“Hannah Tinti’s beautifully constructed second novel . . . uses the scars on Hawley’s body—all twelve bullet wounds, one by one—to show who he is, what he’s done, and why the past chases and clings to him with such tenacity.”—The Boston Globe

“The Twelve Lives of Samuel Hawley is an adventure epic with the deeper resonance of myth. . . . Tinti exhibits an aptitude for shining a piercing light into the corners of her characters’ hearts and minds.”—O: The Oprah Magazine

Hannah Tinti grew up in Salem, Massachusetts. Her short story collection Animal Crackers was a runner-up for the PEN/Hemingway Award. Her bestselling novel The Good Thief won the Center for Fiction First Novel Prize and an American Library Association Alex Award, and was a New York Times Notable Book of the Year. Tinti is the co-founder and executive editor of the award-winning literary magazine One Story.

“Can a man be both a violent criminal and a good father? Imagine a Quentin Tarantino movie crossed with a John Green novel, and you’ll have a sense of what this coming-of-age novel is like.”—Entertainment Weekly

“Tinti depicts brutality and compassion with exquisite sensitivity, creating a powerful overlay of love and pain.” —The New Yorker

“The book [has] an irresistible velocity that Ms. Tinti sustains to the end.”—The Wall Street Journal

“Tinti has established herself as one of our great storytellers. She draws you in with this book, and it’s really difficult to get away.”—Rolling Stone

“A shoot-em-up, a love story and a mystery, this is one heartwarming feast of a book.”—People

“The term ‘literary thriller’ is almost an oxymoron. It’s the writerly equivalent of threading a needle while riding on a rollercoaster, requiring attention to character and fine prose while hurtling from one near-disaster to another. Only a few writers can pull it off, and Hannah Tinti is one of them. . . . The Twelve Lives of Samuel Hawley is a gripping father-daughter road trip where the bad guys are never far behind. . . . Tarantino-like in its plot twists, action, and violence, the novel sweeps across the country and back and forth in time. Its structure feels as meticulously crafted as a matchstick Taj Mahal.”—Interview

“Tinti makes each of her crime scenes wildly different yet equally suspenseful. As skillful as she is, she never romanticizes her bad actors. What most deeply interests her is the stumbling, fumbling humanity that results in bad actions. . . . She fuses urgent, vibrant storytelling with a keen understanding of broken people desperate to be whole.”—Newsday

“Even before the official release of The Twelve Lives of Samuel Hawley in March, early readers deemed it worthy of excitement. . . . At once a coming-of-age adventure, a love story and a literary thriller.”—Time

“The Twelve Lives of Samuel Hawley is a miraculous accomplishment in genre-bending: Not only a gripping American-on-the-run thriller, it’s also a brilliant coming-of-age tale and a touching exploration of father-daughter relationships. Regardless of what your reading tastes are, there’s something here for absolutely everyone.”—Newsweek

“The Twelve Lives of Samuel Hawley is an adventure epic with the deeper resonance of myth. . . . Tinti exhibits an aptitude for shining a piercing light into the corners of her characters’ hearts and minds. Her ability to lay bare their passions, portraying their vulnerabilities and violent urges with equal insight, leaves the reader at once shaken and moved.”—O: The Oprah Magazine

“The Twelve Lives of Samuel Hawley is one part Quentin Tarantino, one part Scheherazade, and twelve parts wild innovation. Hannah Tinti proves herself to be an old-fashioned storyteller of the highest order.”—Ann Patchett, author of Commonwealth

This feature require that you enable JavaScript in your browser.
END_OF_DOCUMENT_TOKEN_TO_BE_REPLACED

This feature require that you enable JavaScript in your browser.
END_OF_DOCUMENT_TOKEN_TO_BE_REPLACED

This feature require that you enable JavaScript in your browser.
END_OF_DOCUMENT_TOKEN_TO_BE_REPLACED