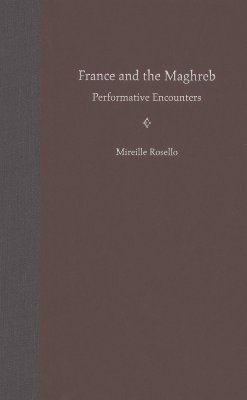 By Mireille Rosello
Email or call for price.

Looking at writers, directors, and thinkers who are linked to the Maghreb, Mireille Rosello argues that new types of encounters between the French and the Algerians have the potential to counteract the negative force of history. She maintains that these "performative" encounters are moments of fragile and precarious exchange that could shift the tragic paradigm of violence and mistrust among Arabs, Berbers, and Europeans or among Christians, Muslims, and Jews. A performative encounter between historical adversaries creates new subject-positions, a new language, and a new protocol of cohabitation, she contends. Performance encounters inaugurate a new historical script. At such times subjects can redefine each other, and they can speak not in French or Arabic but in a language similar to Khatibi's poetical and interstitial "bilanguage" that reexamines the terms and practices of their interaction. Attentive to the interconnections among language, gender, literature, and cultural politics, Rosello looks at a rich variety of contemporary stories generated by historians (Benjamin Stora, Mohamed Harbi, Charles-Robert Ageron), philosophers (Jacques Derrida), filmmakers (Yamina Benguigui, Mehdi Lallaoui), and emerging and internationally famous writers (Fouad Laroui, Mehdi Charef, Abdelkebir Khatibi). She devotes special consideration to an innovative analysis of the work of one of the most important contemporary French-language writers, Assia Djebar.

Mireille Rosello, professor of French and comparative literary studies at Northwestern University, is the author of three books in French and three in English, most recently Postcolonial Hospitality: The Immigrant as Guest.

This feature require that you enable JavaScript in your browser.
END_OF_DOCUMENT_TOKEN_TO_BE_REPLACED

This feature require that you enable JavaScript in your browser.
END_OF_DOCUMENT_TOKEN_TO_BE_REPLACED

This feature require that you enable JavaScript in your browser.
END_OF_DOCUMENT_TOKEN_TO_BE_REPLACED