American Hotel: The Waldorf-Astoria and the Making of a Century (Hardcover) 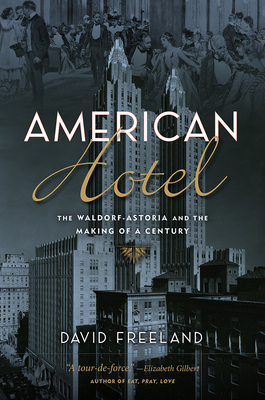 Completed in 1931, New York’s Waldorf-Astoria towers over Park Avenue as an international landmark and a masterpiece of Art Deco architecture. A symbol of elegance and luxury, the hotel has hosted countless movie stars, business tycoons, and world leaders over the past ninety years.

American Hotel takes us behind the glittering image to reveal the full extent of the Waldorf’s contribution toward shaping twentieth-century life and culture. Historian David Freeland examines the Waldorf from the opening of its first location in 1893 through its rise to a place of influence on the local, national, and international stage. Along the way, he explores how the hotel’s mission to provide hospitality to a diverse range of guests was put to the test by events such as Prohibition, the anticommunist Red Scare, and civil rights struggles.

Alongside famous guests like Frank Sinatra, Martin Luther King, Richard Nixon, and Eleanor Roosevelt, readers will meet the lesser-known men and women who made the Waldorf a leader in the hotel industry and a key setting for international events. American Hotel chronicles how institutions such as the Waldorf-Astoria played an essential role in New York’s growth as a world capital.

DAVID FREELAND is a historian and journalist who has written for the Wall Street Journal, New York History, and Time Out New York. His books include Ladies of Soul and Automats, Taxi Dances, and Vaudeville: Excavating Manhattan’s Lost Places of Leisure. In his free time, David leads walking tours of New York City, where he lives, and gives lectures on the city’s culture and history.

"David Freeland is such a fascinating writer, and a true scholar of New York City. I have always loved the passion and joy that he brings to his work, and I’ve learned so much from him over the years. In this book, Freeland takes us on a tour of one hundred years of American history, as seen through the lens of New York’s legendary Waldorf-Astoria. From turn-of-the-century battles over women’s rights, through Prohibition, battles over Labor rights, communism, and segregation, the Waldorf has played host to some of the most electrifying moments in the American story. Through Freeland’s meticulous research, this book—and the Waldorf-Astoria itself—jump vividly to life. A tour-de-force."
— Elizabeth Gilbert

"David Freeland is a master at reconstructing lost Manhattan history and plunging us into it. Now he checks us into the most glamorous hotel New York has ever known and lets us wallow in its luxuries, meet its quirky cast of characters, applaud its shows, and uncover its scandals. This fascinating book tracks the unfolding of several unforgettable eras and shows us what made a phenomenon like the Waldorf-Astoria possible."
— James Gavin

"Known internationally as a symbol of elegance and luxury, Manhattan’s Waldorf-Astoria is one of the world’s most famous hotels. Its reputation as a host to political leaders and movie stars is matched only by the renown of its cuisine and soaring Art Deco architecture....American Hotel: The Waldorf-Astoria and The Making of a Century [goes] behind the glittering image, using rare photos and documents to reveal the full extent of the Waldorf’s contribution as a shaper of twentieth-century life and culture."
— Untapped Cities

"The many lives of the Waldorf-Astoria and the future of the iconic NYC hotel," by Jacqueline Cutler
— New York Daily News

"Freeland’s new book offers a new perspective. While exclusion, discrimination and shoddy treatment of guests are woven into the histories of all American hotels, he argues that the Waldorf’s legacy is largely one of openness and acceptance. Its very symbolism enabled it to play a part in creating a more inclusive society."
— BookTrib

"American Hotel explores the ways in which the Waldorf-Astoria shaped popular notions about hotels in the twentieth century. The concept of a hotel containing a village-like arcade of shops on site was among the many innovations that the Waldorf-Astoria pioneered. Guests were now able to shop, dine, and entertain themselves without venturing beyond the hotel’s walls. This new model, which persists to the current day (for instance, in all-inclusive resorts), was quickly copied by other hotels around the world."
— The New Criterion

This feature require that you enable JavaScript in your browser.
END_OF_DOCUMENT_TOKEN_TO_BE_REPLACED

This feature require that you enable JavaScript in your browser.
END_OF_DOCUMENT_TOKEN_TO_BE_REPLACED

This feature require that you enable JavaScript in your browser.
END_OF_DOCUMENT_TOKEN_TO_BE_REPLACED