Asian American Religions: The Making and Remaking of Borders and Boundaries (Paperback) 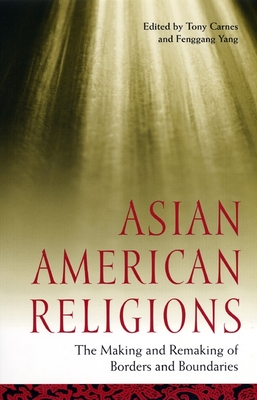 Asian American Religions brings together some of the most current research on Asian American religions from a social science perspective. The volume focuses on religion in Asian American communities in New York, Houston, Los Angeles, and the Silicon Valley/Bay Area, and it includes a current demographic overview of the various Asian populations across the United States. It also provides information on current trends, such as that Filipino and Korean Americans are the most religiously observant people in America, that over 60 percent of Asian Americans who have a religious identification are Christian, and that one-third of Muslims in the United States are Asian Americans.
Rather than organizing the book around particular ethnic groups or religions, Asian American Religions centers on thematic issues, like symbols and rituals, political boundaries, and generation gaps, in order to highlight the role of Asian American religions in negotiating, accepting, redefining, changing, and creating boundaries in the communities' social life.

Tony Carnes directs the Seminar on Contents and Methods in the Social Sciences at Columbia University, the International Research Institute on Values Changes, and the Research Institute for New Americans. He is the coeditor of New York Glory: Religions in the City (NYU Press, 2001).

This feature require that you enable JavaScript in your browser.
END_OF_DOCUMENT_TOKEN_TO_BE_REPLACED

This feature require that you enable JavaScript in your browser.
END_OF_DOCUMENT_TOKEN_TO_BE_REPLACED

This feature require that you enable JavaScript in your browser.
END_OF_DOCUMENT_TOKEN_TO_BE_REPLACED