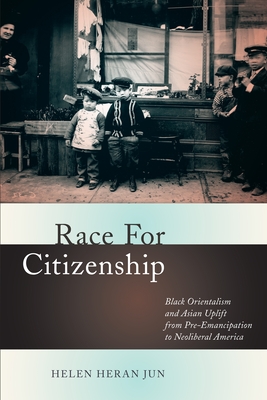 Race for Citizenship examines three salient moments when African American and Asian American citizenship become acutely visible as related crises: the 'Negro Problem' and the 'Yellow Question' in the mid- to late 19th century; World War II-era questions around race, loyalty, and national identity in the context of internment and Jim Crow segregation; and post-Civil Rights discourses of disenfranchisement and national belonging under globalization. Taking up a range of cultural texts--the 19th century black press, the writings of black feminist Anna Julia Cooper, Asian American novels, African American and Asian American commercial film and documentary--Jun does not seek to document signs of cross-racial identification, but instead demonstrates how the logic of citizenship compels racialized subjects to produce developmental narratives of inclusion in the effort to achieve political, economic, and social incorporation. Race for Citizenship provides a new model of comparative race studies by situating contemporary questions of differential racial formations within a long genealogy of anti-racist discourse constrained by liberal notions of inclusion.

Helen Heran Jun is Assistant Professor of English and African American Studies at the University of Illinois, Chicago.

This feature require that you enable JavaScript in your browser.
END_OF_DOCUMENT_TOKEN_TO_BE_REPLACED

This feature require that you enable JavaScript in your browser.
END_OF_DOCUMENT_TOKEN_TO_BE_REPLACED

This feature require that you enable JavaScript in your browser.
END_OF_DOCUMENT_TOKEN_TO_BE_REPLACED