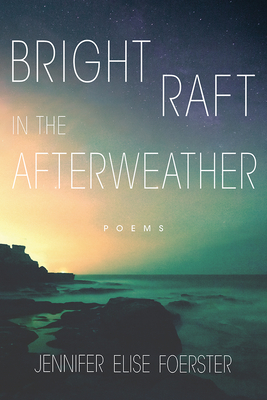 This is book number 82 in the Sun Tracks series.

In her dazzling new book, Jennifer Elise Foerster announces a frightening new truth: “the continent is dismantling.” Bright Raft in the Afterweather travels the spheres of the past, present, future, and eternal time, exploring the fault lines that signal the break of humanity’s consciousness from the earth.

Featuring recurring characters, settings, and motifs from her previous book, Leaving Tulsa, Foerster takes the reader on a solitary journey to the edges of the continents of mind and time to discover what makes us human. Along the way, the author surveys the intersection between natural landscapes and the urban world, baring parallels to the conflicts between Native American peoples and Western colonizers, and considering how imagination and representation can both destroy and remake our worlds.
Foerster’s captivating language and evocative imagery immerse the reader in a narrative of disorientation and reintegration. Each poem blends Foerster’s refined use of language with a mythic and environmental lyricism as she explores themes of destruction, spirituality, loss, and remembrance.

In a world wrought with ecological imbalance and grief, Foerster shows how from the devastated land of our alienation there is potential to reconnect to our origins and redefine the terms by which we inhabit humanity and the earth.

Jennifer Elise Foerster is an alumna of the Institute of American Indian Arts, received her MFA in writing from the Vermont College of Fine Arts, and is a PhD candidate in English and Creative Writing at the University of Denver. Foerster is the recipient of a 2017 NEA Creative Writing Fellowship, a Lannan Foundation Writing Residency Fellowship, and was a Wallace Stegner Fellow in Poetry at Stanford University. A member of the Muscogee (Creek) Nation of Oklahoma, Foerster is the author of one previous book of poems, Leaving Tulsa.

“Jennifer Foerster’s Bright Raft in the Afterweather is an enchanting amalgamation of tradition and modernity, nature and humanity, celebration and loss. From its idyllic gleams to its apocalyptic warnings, this collection identifies sacred aspects of nature and human nature well worth preserving. In these senses, this book is a “bright raft” for the “afterweather”—a lifeline before the coming storms.”—NewPages

“Foerster’s efforts to document a disintegrating world add up to an impressive record of survival.”—Publishers Weekly

“An immersion in Bright Raft in the Afterweather means you must abandon the certainties of shore and go with the brilliant, moment-to-moment flow of language, in eddies and currents which yield moments of sharp perception, along with a haunting call to see differently.”—Water~Stone Review

“When you think of the nightingale, do you think of that poet’s bird Keats and the Romantics celebrated for its song? Or the lamentable bird from the violent myth of Philomela and Procne? Is it coincidence that, in nature, the female nightingale is mute and only the male? Hardly. In the Afterweather, the poet is called to fashion a new vessel to carry us forward, giving voice in these poems—and presence—to those who’ve been overlooked. Jennifer Elise Foerster is such a poet. “Don’t sleep yet,” she encourages, “I’m rowing toward you.”’—Colorado Review

“We are adrift in mythic waters that hold the possibility of rebirth even as they float the remains of human destruction. We could be in San Francisco, within the mythos of a painter’s creation, or walking a Greek island with time. Wherever we are in the poems, islands rise up of tremendous linguistic beauty, rendering hope from songs. The book is a bird flown free in the power of the winds.”—Joy Harjo

“Pick this book’s dark pages—befriend it—and you’ll come to know Jennifer Foerster’s second collection as a particularly strong chronicle of ontological strain. It’s everywhere at once and also singular, very like the world it finds itself in and about. And what it enables its fortunate readers to access is not the satisfaction of so-called closure, but rather the rush and the precariousness of connection, the act, as Wallace Stevens says, ‘of finding / What will suffice.’”—Graham Foust

“Here is a language that adjusts to—is touched and changed by—the details and registers of its worlds. I think of the dilating eye, the body interpreting light, and so, scene by scene and sense by sense, becoming. In particular, Jennifer Elise Foerster’s precise and gorgeously strange, original diction is a site or result of this unending shifting. This empathic, lucid work flickers with the knowledge that under this word (place) is another word (place), evoking wonder and gratitude. ‘[W]alk into the greenly singular, singing / the long sight line,’ she writes, and makes me remember that to read poetry is to read more than language; it is to read a body, a place, a world.”—Aracelis Girmay

“Merging the poetic with the prophetic, Foerster offers a startling vision of how to navigate this broken world and its resilient beauty.”—Rigoberto González

This feature require that you enable JavaScript in your browser.
END_OF_DOCUMENT_TOKEN_TO_BE_REPLACED

This feature require that you enable JavaScript in your browser.
END_OF_DOCUMENT_TOKEN_TO_BE_REPLACED

This feature require that you enable JavaScript in your browser.
END_OF_DOCUMENT_TOKEN_TO_BE_REPLACED