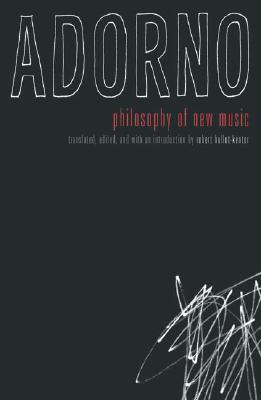 In 1947 Theodor W. Adorno, one of the seminal European philosophers of the postwar years, announced his return after exile in the United States to a devastated Europe by writing Philosophy of New Music. Intensely polemical from its first publication, every aspect of this work was met with extreme reactions, from stark dismissal to outrage. Even Schoenberg reviled it.

Despite the controversy, Philosophy of New Music became highly regarded and widely read among musicians, scholars, and social philosophers. Marking a major turning point in his musicological philosophy, Adorno located a critique of musical reproduction as internal to composition itself, rather than as a matter of the reproduction of musical performance. Consisting of two distinct essays, “Schoenberg and Progress” and “Stravinsky and Reaction,” this work poses the musical extremes in which Adorno perceived the struggle for the cultural future of Europe: between human emancipation and barbarism, between the compositional techniques and achievements of Schoenberg and Stravinsky.

In this completely new translation—presented along with an extensive introduction by distinguished translator Robert Hullot-Kentor—Philosophy of New Music emerges as an indispensable key to the whole of Adorno's illustrious and influential oeuvre.

Theodor W. Adorno (1903-1969) was the leading figure of the Frankfurt school of critical theory. He authored more than twenty volumes, including Negative Dialectics (1982), Kierkegaard (Minnesota, 1989), Dialectic of Enlightenment (1975) with Max Horkheimer, and Aesthetic Theory (Minnesota, 1998).

Robert Hullot-Kentor has taught at Harvard and Stanford universities and written widely on Adorno. He has translated various works of Adorno, including Aesthetic Theory, and is the author of Things beyond Resemblance: Collected Essays on Theodor W. Adorno.

"A manifesto on how criticism could actively participate in and clarify artistic concerns, immanently complicating solidarity between theory and practice."—Platypus Review

"A surprisingly accessible entry point into understanding Adorno the aesthete. Through a well-crafted and detailed introduction, Hullot-Kentor allows us to glimpse Adorno at the time of this writing—both enamored of and bothered by the works of Schoenberg, repulsed by American culture, not yet hardened into the diamond point of negative dialectics."—PopMatters

This feature require that you enable JavaScript in your browser.
END_OF_DOCUMENT_TOKEN_TO_BE_REPLACED

This feature require that you enable JavaScript in your browser.
END_OF_DOCUMENT_TOKEN_TO_BE_REPLACED

This feature require that you enable JavaScript in your browser.
END_OF_DOCUMENT_TOKEN_TO_BE_REPLACED