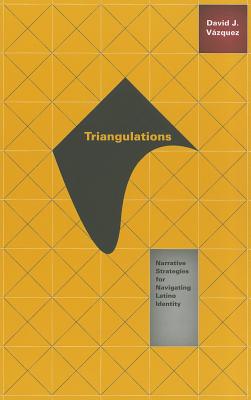 By David J. Vázquez
Email or call for price.

Just as mariners use triangulation, mapping an imaginary triangle between two known positions and an unknown location, so, David J. Vázquez contends, Latino authors in late twentieth-century America employ the coordinates of familiar ideas of self to find their way to new, complex identities. Through this metaphor, Vázquez reveals how Latino autobiographical texts, written after the rise of cultural nationalism in the 1960s, challenge mainstream notions of individual identity and national belonging in the United States.

In a traditional autobiographical work, the protagonist frequently opts out of his or her community. In the works that Vázquez analyzes in Triangulations, protagonists instead opt in to collective groups—often for the express political purpose of redefining that collective. Reading texts by authors such as Ernesto Galarza, Jesús Colón, Piri Thomas, Oscar “Zeta” Acosta, Judith Ortiz Cofer, John Rechy, Julia Alvarez, and Sandra Cisneros, Vázquez engages debates about the relationship between literature and social movements, the role of cultural nationalism in projects for social justice, the gender and sexual problematics of 1960s cultural nationalist groups, the possibilities for interethnic coalitions, and the interpretation of autobiography. In the process, Triangulations considers the potential for cultural nationalism as a productive force for aggrieved communities of color in their struggles for equality.

David J. Vázquez is assistant professor of English at the University of Oregon.

This feature require that you enable JavaScript in your browser.
END_OF_DOCUMENT_TOKEN_TO_BE_REPLACED

This feature require that you enable JavaScript in your browser.
END_OF_DOCUMENT_TOKEN_TO_BE_REPLACED

This feature require that you enable JavaScript in your browser.
END_OF_DOCUMENT_TOKEN_TO_BE_REPLACED