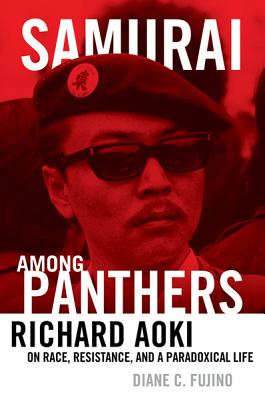 By Diane C. Fujino
Email or call for price.

An iconic figure of the Asian American movement, Richard Aoki (1938–2009) was also, as the most prominent non-Black member of the Black Panther Party, a key architect of Afro-Asian solidarity in the 1960s and ’70s. His life story exposes the personal side of political activism as it illuminates the history of ethnic nationalism and radical internationalism in America.

A reflection of this interconnection, Samurai among Panthers weaves together two narratives: Aoki’s dramatic first-person chronicle and an interpretive history by a leading scholar of the Asian American movement, Diane C. Fujino. Aoki’s candid account of himself takes us from his early years in Japanese American internment camps to his political education on the streets of Oakland, to his emergence in the Black Panther Party. As his story unfolds, we see how his parents’ separation inside the camps and his father’s illegal activities shaped the development of Aoki’s politics. Fujino situates his life within the context of twentieth-century history—World War II, the Cold War, and the protests of the 1960s. She demonstrates how activism is both an accidental and an intentional endeavor and how a militant activist practice can also promote participatory democracy and social service.

The result of these parallel voices and analysis in Samurai among Panthers is a complex—and sometimes contradictory—portrait of a singularly extraordinary activist and an expansion and deepening of our understanding of the history he lived.

"My friend Richard Aoki was there when Huey P. Newton and I founded our Black Panther Party, discussing political analysis and seeking critique approval of our Ten Point Program. This book is a necessary kind of reading that illuminates my friend’s political revolutionary life’s meaning: Richard Aoki’s reverence." —Bobby Seale, founding Chairman and National Organizer of the Black Panther Party

"Richard Aoki straddled the worlds of ethnicity by the radical bridge he built through his engagement with an authentic, even saucy American radicalism. Diane C. Fujino unearths Richard’s story with sympathy and warmth, and in the process redeems the legacy of a remarkable American radical." —Vijay Prashad, author of The Darker Nations: A People's History Of The Third World

"Samurai among Panthers is a bracing, honest, and revealing biography. The book is a powerful reminder that although social movements operate collectively within social and political contexts, they are ultimately enacted by individuals who, like Richard Aoki, are flawed, complicated, dedicated, and visionary." —Daryl J. Maeda, author of Rethinking the Asian American Movement

This feature require that you enable JavaScript in your browser.
END_OF_DOCUMENT_TOKEN_TO_BE_REPLACED

This feature require that you enable JavaScript in your browser.
END_OF_DOCUMENT_TOKEN_TO_BE_REPLACED

This feature require that you enable JavaScript in your browser.
END_OF_DOCUMENT_TOKEN_TO_BE_REPLACED