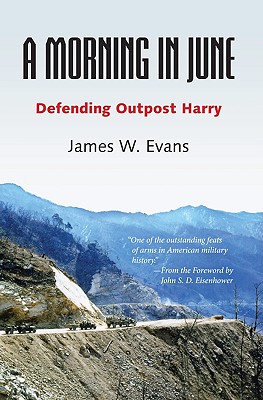 By June 1953 the Korean War, marked at the outset by extremely fluid advances and retreats up and down the peninsula, had settled into position warfare very near the original pre-war demarcation line between North and South Korea. At this point both sides were fighting to win a peace, to achieve incremental advantages that could be translated into gains at the peace negotiations in Panmunjom. These last days of the war saw savage battles for control of important local terrain features, and in the trench warfare of the Chorwon Valley a young U.S. Army lieutenant was assigned to lead an infantry company charged with holding Outpost Harry against a determined Chinese assault.  The battle devolved into hand-to-hand combat during a period of constant, intense fighting that lasted two days. The author, although seriously wounded that night, refused evacuation and remained on the hill to successfully lead his company in defense of the outpost. It wasn’t romantic; it wasn’t chivalrous; and many died or were badly wounded. Some of the survivors never fully overcame the mental and physical damage they suffered during the nightmare. With this book, one of those scarred by that experience recounts the events of the battle and his lifelong efforts to deal with the residual horrors. The Korean Conflict may be called “the forgotten war” by some, but not by those who were on the front lines.

James W. Evans served as a U.S. Army infantry officer in Korea in 1952–53 and received the Silver Star for his leadership of Company A, 1st Battalion, 5th Regimental Combat Team, which also earned the Distinguished Unit Citation for their defense of Outpost Harry. Following a civilian career in the computer industry, he currently resides in Williamsburg, Virginia. John S. D. Eisenhower attained the rank of Brigadier General in the U.S. Army before retiring in 1975 and then served as U.S. Ambassador to Belgium under President Nixon. The son of Mamie and Dwight D. Eisenhower, he is best known for his military histories, especially Bitter Woods (on the Battle of the Bulge) and So Far from God (on the Mexican-American War).

“A heartfelt, honest work. Mr. Evans writes in a humble, straightforward style reminiscent of some of the best Civil War soldier memoirs. He gives the reader a ‘you-are-there’ feel in the book. Indeed, through the author’s narrative I could almost feel the cold of bone-chilling winds coming down from Siberia; hear the shrill whistles, burp gun bursts, and yells of the sea of Chinese infantry surging toward Company A’s positions on Outpost Harry. . . . A Morning in June is not for the faint of heart; it pulls no punches in its description of raw hand-to-hand combat almost prehistoric in its savagery.”—Richard D. Goldblatt, retired Army Intelligence Officer

This feature require that you enable JavaScript in your browser.
END_OF_DOCUMENT_TOKEN_TO_BE_REPLACED

This feature require that you enable JavaScript in your browser.
END_OF_DOCUMENT_TOKEN_TO_BE_REPLACED

This feature require that you enable JavaScript in your browser.
END_OF_DOCUMENT_TOKEN_TO_BE_REPLACED