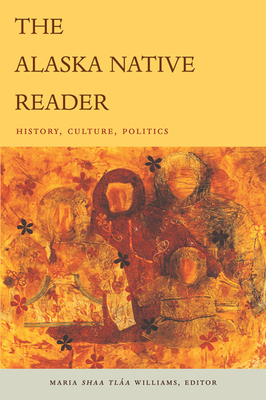 Alaska is home to more than two hundred federally recognized tribes. Yet the long histories and diverse cultures of Alaska's first peoples are often ignored, while the stories of Russian fur hunters and American gold miners, of salmon canneries and oil pipelines, are praised. Filled with essays, poems, songs, stories, maps, and visual art, this volume foregrounds the perspectives of Alaska Native people, from a Tlingit photographer to Athabascan and Yup'ik linguists, and from an Alutiiq mask carver to a prominent Native politician and member of Alaska's House of Representatives. The contributors, most of whom are Alaska Natives, include scholars, political leaders, activists, and artists. The majority of the pieces in The Alaska Native Reader were written especially for the volume, while several were translated from Native languages.

The Alaska Native Reader describes indigenous worldviews, languages, arts, and other cultural traditions as well as contemporary efforts to preserve them. Several pieces examine Alaska Natives' experiences of and resistance to Russian and American colonialism; some of these address land claims, self-determination, and sovereignty. Some essays discuss contemporary Alaska Native literature, indigenous philosophical and spiritual tenets, and the ways that Native peoples are represented in the media. Others take up such diverse topics as the use of digital technologies to document Native cultures, planning systems that have enabled indigenous communities to survive in the Arctic for thousands of years, and a project to accurately represent Dena'ina heritage in and around Anchorage. Fourteen of the volume's many illustrations appear in color, including work by the contemporary artists Subhankar Banerjee, Perry Eaton, Erica Lord, and Larry McNeil.

This feature require that you enable JavaScript in your browser.
END_OF_DOCUMENT_TOKEN_TO_BE_REPLACED

This feature require that you enable JavaScript in your browser.
END_OF_DOCUMENT_TOKEN_TO_BE_REPLACED

This feature require that you enable JavaScript in your browser.
END_OF_DOCUMENT_TOKEN_TO_BE_REPLACED