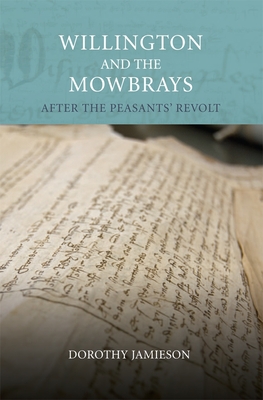 Drawing on documentary evidence dating between 1382 and 1522, this volume examines a single manor parish that was dominated by the powerful Mowbray family, the Dukes of Norfolk, and by Katherine Neville, widow of the second Duke, as part of her dower 1432-c.1482. Numerous documents relating to the manor are extant including 101 manor court rolls, bailiffs' accounts and receiver's accounts; taken together they provide an insight into local administration and justice in a rural settlement on the south bank of the River Great Ouse, east of Bedford.
The Newnham Priory terrier, a transcription of which is included in this book, gives details of the prior's holdings in the manor in 1507. Although the prior held substantial lands in Willington, it seems that life in the manor was less influenced by the church in the years after the Peasants' Revolt than by members of local families, such as the Gostwyks, who would later go on to undertake roles of national importance.
Although the structure and language of the manorial records suggests continuity and a hierarchical system of control, the history of Willington reveals how tenants took opportunities to better themselves and their families while the lords of the manor sought to maintain the value of their property and income. This was a difficult task due to long-standing issues with declining rental values and ruined buildings. While there is evidence for crime and disorder, the manor emerges as a relatively stable community where the custom of the manor prevailed, and the local bailiff, almost always a resident, was a pivotalfigure.

DOROTHY JAMIESON has an M.A. in English Local History from the University of Leicester. She translated the Willington Manor Court Rolls, 1394-1674, about one hundred of which can be found on the Bedfordshire Archives web-site. Her most recent project has been the transcription, translation and analysis of the Wroxhill Custumal of 1253, which has been completed with the assistance of Dr Kathryn Faulkner of Bedfordshire Archives.

This feature require that you enable JavaScript in your browser.
END_OF_DOCUMENT_TOKEN_TO_BE_REPLACED

This feature require that you enable JavaScript in your browser.
END_OF_DOCUMENT_TOKEN_TO_BE_REPLACED

This feature require that you enable JavaScript in your browser.
END_OF_DOCUMENT_TOKEN_TO_BE_REPLACED