The Chessmen (The Lewis Trilogy #3) (Paperback) 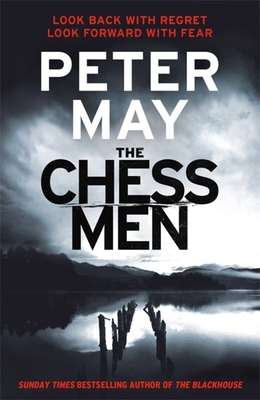 This is book number 3 in the The Lewis Trilogy series.

Living again of the Isle of Lewis, ex-Detective Inspector Fin Macleod is working as a security officer for a local landowner. While investigating illegal activity on the estate, Fin encounters his former childhood friend and bandmate, the elusive poacher Whistler Macaskill.
When Fin catches up with Whistler among the windswept hills of the estate, the two witness a freak natural phenomenon--a bog burst--which drains a loch of all its water in a flash, revealing a mud-encased light aircraft with a sickeningly familiar moniker on its side.
Both men immediately know what they will find inside: the body of Roddy Mackenzie, a friend whose flight disappeared more than seventeen years before. But when Whistler's face appears to register something other than shock, an icy chill of apprehension overtakes Fin. What secret has Whistler been hiding from him, and everyone else on the island?

Peter May is the multi award-winning author of the internationally best-selling Lewis Trilogy set in the Outer Hebrides of Scotland; the China Thrillers, featuring Beijing detective Li Yan and American forensic pathologist Margaret Campbell; the critically-acclaimed Enzo Files, featuring Scottish forensic scientist Enzo MacLeod, which is set in France; and Entry Island. One of Scotland's most prolific television dramatists, he garnered more than a thousand credits in fifteen years as scriptwriter and script editor on prime-time British television drama. He is the creator of three major television drama series and presided over two of the highest-rated serials in his homeland before quitting television to concentrate on his first love, writing novels.

"May brings his acclaimed Lewis trilogy to a close with a novel that is both wrenching and hopeful . . . an utterly absorbing mystery."—Booklist (Starred Review)

"Peter May is a writer I'd follow to the ends of the earth."—Marilyn Stasio, The New York Times

"[An] accomplished trilogy . . . The influence of a hidebound church is all-pervasive and all-stultifying. But this is only part of the rich texture with which May has invested these books, elevating them above most contemporary crime fiction . . . The Chessmen draws together the fascinating elements of the earlier books . . . Although all three books may be read as standalones, their cumulative effect is more powerful. This is the sort of novel that will have the reader relishing every the tendency of description and characterisation. The history and folklore of the Hebridean islands are the integuments of the book, and The Chessmen offers an almost visceral experience: we, too, are walking these windy cliffs and peat bogs with Fin. Readers will find it hard to say goodbye to him, but we have to admire May for sticking to his vision of a perfectly-formed trilogy."—Barry Forshaw, The Independent

"The Chessmen is well up to the high standard of its two predecessors: tightly plotted, with no skimping on either the nuances of character or the wonderfully evocative descriptions of rugged island landscapes that have made these books a true pleasure to read."—The Guardian

"It is that setting which anchors Glasgow-born Peter May's The Chessmen, the third in his trilogy following Fin Macleod, a detective for whom the pull of his homeland, Lewis, is too powerful to resist . . . vivid and poignant."—The Scotsman

"A great example of visual storytelling and a tight plot."—The Daily Record

"This intriguing story alternates between the present, the past, and the distant past, skillfully introducing all of the characters and motives that will play an integral part in the solution of the mysteries. It is powerfully written, both in the descriptions of the barren landscape and the complicated and constantly changing relationships of the primary people involved."
—Mystery Scene Magazine

"Incredible . . . the series has become a store favorite, and this concluding volume makes for a perfect end-cap. This series deserves to be read."—The Mysterious Bookshop

"[A] stunning trilogy . . . a poignant study of trust, truth and regrets."—Adam Woog, The Seattle Times

"Another riveting read that is a 'must' for the legions of Peter May fans . . . Very highly recommended."
—Midwest Book Review

This feature require that you enable JavaScript in your browser.
END_OF_DOCUMENT_TOKEN_TO_BE_REPLACED

This feature require that you enable JavaScript in your browser.
END_OF_DOCUMENT_TOKEN_TO_BE_REPLACED

This feature require that you enable JavaScript in your browser.
END_OF_DOCUMENT_TOKEN_TO_BE_REPLACED