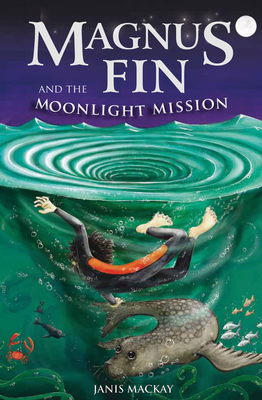 Middle grade fantasy adventure based on traditional folklore, from an award-winning author

On his eleventh birthday, schoolboy Magnus Fin found out that he was half selkie -- part human, part seal. Although he looks like a boy and lives on land, he can breathe underwater.

When Magnus Fin discovers his initials scratched into the rocks by the shore and finds dead seals washed up on the beach, he knows his selkie family needs his help, and he dives down beneath the waves to find out more.

The great seal sickness has struck and his grandmother Miranda is dangerously ill. But Magnus Fin is sure there's another reason for their affliction. He sets out to reveal the truth, with just his moonstone, his last baby tooth and some seaweed from Neptune's garden for luck. Little does he know that his best friend Tarkin, who can't swim, is determined to join him on this perilous mission.

This is the exciting sequel to Kelpie Prize-winning Magnus Fin and the Ocean Quest.

Janis Mackay was born and grew up in Edinburgh, but moved to London to study journalism. She has an MA in Creative Writing and has held writer-in-residence posts in both Caithness and Sutherland. She currently lives in Edinburgh, where she teaches creative writing and works as a writer and storyteller.

This feature require that you enable JavaScript in your browser.
END_OF_DOCUMENT_TOKEN_TO_BE_REPLACED

This feature require that you enable JavaScript in your browser.
END_OF_DOCUMENT_TOKEN_TO_BE_REPLACED

This feature require that you enable JavaScript in your browser.
END_OF_DOCUMENT_TOKEN_TO_BE_REPLACED