Immigration and the Remaking of Black America (Paperback) 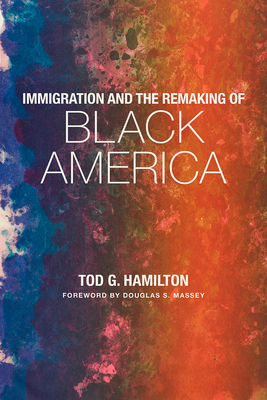 
Over the last four decades, immigration from the Caribbean and sub-Saharan Africa to the U. S. has increased rapidly. In several states, African immigrants are now major drivers of growth in the black population. While social scientists and commentators have noted that these black immigrants’ social and economic outcomes often differ from those of their native-born counterparts, few studies have carefully analyzed the mechanisms that produce these disparities. In Immigration and the Remaking of Black America, sociologist and demographer Tod Hamilton shows how immigration is reshaping black America. He weaves together interdisciplinary scholarship with new data to enhance our understanding of the causes of socioeconomic stratification among both the native-born and newcomers.

Hamilton demonstrates that immigration from the Caribbean and sub-Saharan Africa is driven by selective migration, meaning that newcomers from these countries tend to have higher educational attainment than those who stay behind. As a result, they arrive in the U.S. with some advantages over native-born blacks, and, in some cases, over whites. He also shows the importance of historical context: prior to the Civil Rights Movement, black immigrants’ socioeconomic outcomes resembled native-born blacks’ much more closely, regardless of their educational attainment in their country of origin. Today, however, certain groups of black immigrants have better outcomes than native-born black Americans—such as lower unemployment rates and higher rates of homeownership—in part because they immigrated at a time of expanding opportunities for minorities and women in general. Hamilton further finds that rates of marriage and labor force participation among native-born blacks that move away from their birth states resemble those of many black immigrants, suggesting that some disparities within the black population stem from processes associated with migration, rather than from nativity alone.

Hamilton argues that failing to account for this diversity among the black population can lead to incorrect estimates of the social progress made by black Americans and the persistence of racism and discrimination. He calls for future research on racial inequality to disaggregate different black populations. By richly detailing the changing nature of black America, Immigration and the Remaking of Black America helps scholars and policymakers to better understand the complexity of racial disparities in the twenty-first century.

Tod G. Hamilton is assistant professor of sociology and a faculty associate of the Office of Population Research at Princeton University.

“Using the best available data, state-of-the-art analytical strategies, and sophisticated theoretical framing,Immigration and the Remaking of Black America offers the definitive statement about the diverse experiences of black immigrants to the United States and how they compare to their native-born African American counterparts. Professor Hamilton has unquestionably raised the bar for future scholars who would seek to further advance our understanding of this important, but heretofore poorly understood, population.”

“In the most comprehensive study to date of voluntary black immigration to the United States, Tod Hamilton conducts a tempered and temperate demolition on cherished conventional claims about race, national origin, immigration, and social outcomes. Hamilton’s systematic comparisons of the characteristics and experiences of recent black immigrants vis-à-vis their fellow nationals who remain in their home country, of internal black migrants to the north vis-à-vis those blacks who remained in the south, and of recent black immigrants vis-à-vis the native black American population writ large eradicate cultural-cum-behavioral explanations for ongoing racial inequality in the United States. Immigration and the Remaking of Black America is a masterful study.”

“Immigration and the Remaking of Black America teaches us what it means to be black in America today. Its author, Tod G. Hamilton, provides a timely and accessible theoretical and empirical demographic benchmark describing America’s newest black immigrants. More importantly, Hamilton sets today’s black immigrant experience in comparison with native-born black Americans, who still feel the ancestral sting of forced migration from a much earlier and shameful period in U.S. history. America’s burgeoning immigrant and refugee populations from sub-Saharan Africa are too often overlooked but can tell us a great deal about contemporary race relations, race and class dynamics, and immigrant integration in a multiracial society. Immigration and the Remaking of Black America fills the current void.”

This feature require that you enable JavaScript in your browser.
END_OF_DOCUMENT_TOKEN_TO_BE_REPLACED

This feature require that you enable JavaScript in your browser.
END_OF_DOCUMENT_TOKEN_TO_BE_REPLACED

This feature require that you enable JavaScript in your browser.
END_OF_DOCUMENT_TOKEN_TO_BE_REPLACED