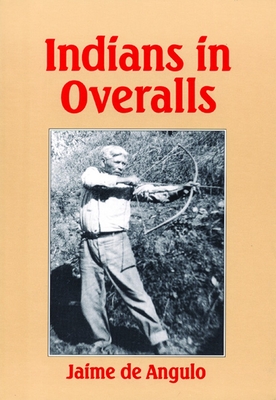 By Jaime De Angulo
$9.95
Special Order - may be out of print

The best-known work by the eccentric anthropologist Jaime de Angulo, Indians in Overalls is a fascinating account of his first linguistic field trip--in 1921--to the Achumawi tribe of northeastern California. The Pit River tribe had lived in the barren high country for thousands of years and, despite the harsh climate and difficult living conditions, they had developed an extraordinary complex language and a rich mythology.

As he traveled with the tribe and learned the spoken language, he observed gambling games and shamanistic practices, and he collected some of the marvelous stories told around the fire in the winter lodges. Of all the people he worked with, he felt closest to the Achumawi, among whom he discovered "the spirit of wonder, the recognition of life as power. . ."

One of the most outstanding writers I have ever encountered. -- William Carlos Williams

Jaime de Angulo (1887-1950) was a Paris-born Spanish novelist and linguist. His other works include Coyote Man and Old Doctor Loon, Coyote's Bones, and The Lariat: and Other Writings.

This feature require that you enable JavaScript in your browser.
END_OF_DOCUMENT_TOKEN_TO_BE_REPLACED

This feature require that you enable JavaScript in your browser.
END_OF_DOCUMENT_TOKEN_TO_BE_REPLACED

This feature require that you enable JavaScript in your browser.
END_OF_DOCUMENT_TOKEN_TO_BE_REPLACED