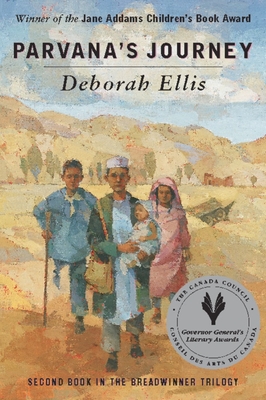 A sequel to The Breadwinner, this novel tells the story of Parvana's journey once she leaves Kabul to search for her family. The Taliban still controls Afghanistan, but Kabul is in ruins, Parvana's father has died, and her mother, sister and brother could be anywhere in the country. Parvana doesn't know where they are. She just knows she has to find them.
Parvana is twelve now, but she sets out alone, masquerading as a boy. Her journey becomes even more perilous when war breaks out, though she doesn't know why the bombs are falling. In her search for shelter and food as she makes her way across the desolate Afghan countryside, she meets other children who are strays from the war -- an infant boy in a bombed-out village; a nine-year-old girl who believes she has magical powers over landmines; and a boy with one leg who is so obnoxious that Parvana can hardly stand him. The children travel together because it is easier than being alone. And, as they forge their own family in the war zone that Afghanistan has become, their resilience, imagination and luck help them to survive.

This feature require that you enable JavaScript in your browser.
END_OF_DOCUMENT_TOKEN_TO_BE_REPLACED

This feature require that you enable JavaScript in your browser.
END_OF_DOCUMENT_TOKEN_TO_BE_REPLACED

This feature require that you enable JavaScript in your browser.
END_OF_DOCUMENT_TOKEN_TO_BE_REPLACED