The Place of Scraps (Paperback) 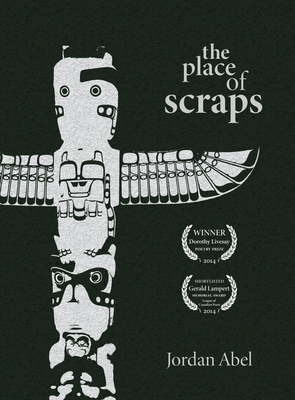 The Place of Scraps revolves around Marius Barbeau, an early-twentieth-century ethnographer, who studied many of the First Nations cultures in the Pacific Northwest, including Jordan Abel's ancestral Nisga'a Nation. Barbeau, in keeping with the popular thinking of the time, believed First Nations cultures were about to disappear completely, and that it was up to him to preserve what was left of these dying cultures while he could. Unfortunately, his methods of preserving First Nations cultures included purchasing totem poles and potlatch items from struggling communities in order to sell them to museums. While Barbeau strove to protect First Nations cultures from vanishing, he ended up playing an active role in dismantling the very same cultures he tried to save. Drawing inspiration from Barbeau's canonical book Totem Poles, Jordan Abel explores the complicated relationship between First Nations cultures and ethnography. His poems simultaneously illuminate Barbeau's intentions and navigate the repercussions of the anthropologist's actions. Through the use of erasure techniques, Abel carves out new understandings of Barbeau's writing - each layer reveals a fresh perspective, each word takes on a different connotation, each letter plays a different role, and each punctuation mark rises to the surface in an unexpected way. As Abel writes his way ever deeper into Barbeau's words, he begins to understand that he is much more connected to Barbeau than he originally suspected.

Jordan Abel is a First Nations writer who lives in Vancouver. He holds a B.A. from the University of Alberta and a M.F.A. from the University of British Columbia. Jordan is an editor for Poetry Is Dead magazine and the former poetry editor for PRISM International. His work has been published in many journals and magazines across Canada, including CV2, The Capilano Review, Prairie Fire, dANDelion, Geist, ARC Poetry Magazine, Descant, Broken Pencil, OCW Magazine, filling Station, Grain, and Canadian Literature. In early 2013, Above/Ground Press published his chapbook Scientia.

This feature require that you enable JavaScript in your browser.
END_OF_DOCUMENT_TOKEN_TO_BE_REPLACED

This feature require that you enable JavaScript in your browser.
END_OF_DOCUMENT_TOKEN_TO_BE_REPLACED

This feature require that you enable JavaScript in your browser.
END_OF_DOCUMENT_TOKEN_TO_BE_REPLACED