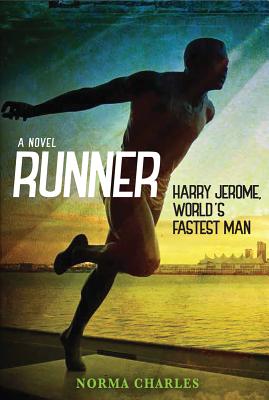 From a skinny little kid growing up in St Boniface, Manitoba, Harry Jerome rose to become "the fastest man in the world," a title he held for an incredible eight years in the 1960s. He competed at the University of Oregon and represented Canada in the 1960, 1964, and 1968 Summer Olympics. During his career, he set seven world records. Harry Jerome achieved all of this in spite of the prejudice he and his family consistently had to fight against because of their African-Canadian heritage.

In this engaging and inspiring novel, acclaimed children's writer Norma Charles has woven together Harry's fascinating life story from information gathered through research, interviews with his family, friends and coach and from her own memories of watching his races at University of British Columbia when she was a student there.

Norma Charles is the author of several books for young readers including See You Later, Alligator, The Accomplish, All the Way to Mexico and Run, Marco Run (winner of the Moonbeam Award for pre-teen novels). She lives in Vancouver, British Columbia.

This feature require that you enable JavaScript in your browser.
END_OF_DOCUMENT_TOKEN_TO_BE_REPLACED

This feature require that you enable JavaScript in your browser.
END_OF_DOCUMENT_TOKEN_TO_BE_REPLACED

This feature require that you enable JavaScript in your browser.
END_OF_DOCUMENT_TOKEN_TO_BE_REPLACED