First In: An Insider's Account of How the CIA Spearheaded the War on Terror in Afghanistan (Paperback) 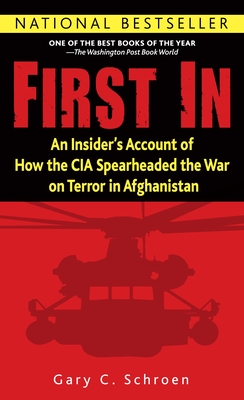 While America held its breath in the days immediately following 9/11, a small but determined group of CIA agents covertly began to change history. This is the riveting first-person account of the treacherous top-secret mission inside Afghanistan to set the stage for the defeat of the Taliban and launch the war on terror.

As thrilling as any novel, First In is a uniquely intimate look at a mission that began the U.S. retaliation against terrorism–and reclaimed the country of Afghanistan for its people.

GARY C. SCHROEN has served in the CIA for thirty-five years, much of his career focusing on the Middle East, including Iran, Saudi Arabia, Pakistan, and Afghanistan. His honors include the Intelligence Cross, the highest award given by the CIA. He lives in Reno, Nevada, with his wife, Betsy.

Advance praise for First In

“A real-life ground-truth account of CIA human intelligence operations that were incredibly successful. The country owes Gary and his comrades, who almost single-handedly won the first phase of the war in Afghanistan. Told with the nitty-gritty detail by the leader who was there–real and compelling.”
–Bob Woodward, author of Bush at War and Plan of Attack

“First In adds yet another enthralling chapter to the endless martial history of Afghanistan. My old colleague Gary Schroen tells his forceful story with the sharpened senses that come only from years of living in the long shadows of the Khyber Pass. You can almost smell the cordite and the chapattis! A terrific yarn about a sad and storied land.”
–Milt Bearden, author of The Black Tulip and co-author of The Main Enemy

“I have read books by army officers who fought in wars past, but never one so true and thorough from a frontline intelligence officer, especially one involved in such an important episode in American history. This is really a grand achievement.”
–Steve Coll, author of Ghost Wars

This feature require that you enable JavaScript in your browser.
END_OF_DOCUMENT_TOKEN_TO_BE_REPLACED

This feature require that you enable JavaScript in your browser.
END_OF_DOCUMENT_TOKEN_TO_BE_REPLACED

This feature require that you enable JavaScript in your browser.
END_OF_DOCUMENT_TOKEN_TO_BE_REPLACED