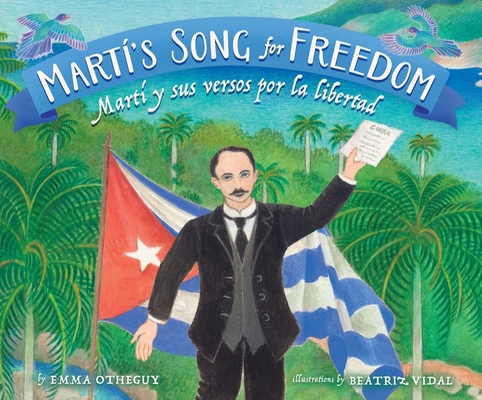 A bilingual biography of Jos Mart , who dedicated his life to the promotion of liberty-abolishment of slavery, political independence for Cuba, and intellectual independence from colonialism for all Latinos. Written in verse with excerpts from Mart 's seminal work, Versos sencillos.

As a boy, Jos Mart was inspired by the natural world. He found freedom in the river that rushed to the sea and peace in the palmas reales that swayed in the wind. Freedom, he believed, was the inherent right of all men and women. But his home island of Cuba was colonized by Spain, and some of the people were enslaved by rich landowners. Enraged, Mart took up his pen and fought against this oppression through his writings. By age seventeen, he was declared an enemy of Spain and forced to leave his beloved island.

Mart traveled the world, speaking out for Cuba's independence. But throughout his exile, he suffered from illness and homesickness. He found solace in New York's Catskill Mountains, where nature inspired him once again to fight for independence.

Written in verse, with excerpts from Mart 's seminal Versos sencillos, this book is a beautiful tribute to a brilliant political writer and courageous fighter of freedom for all men and women.

Emma Otheguy is a children's book author and a historian of Spain and colonial Latin America. She is a member of the Bank Street Writers Lab, and her short story Fairies in Town was awarded a Magazine Merit Honor by the Society of Children's Book Writers and Illustrators (SCBWI). Otheguy lives with her husband in New York City. This is her picture book debut. You can find her online at emmaotheguy.com. Beatriz Vidal is an award-winning painter and illustrator, whose titles include Marti's Song for Freedom/Marti y sus versos por la libertad from Lee & Low Books. Her artwork has been featured in numerous exhibitions around the world, including the International Exhibition of Illustrations for Children in Italy and the Society of Illustrators in New York. Vidal divides her time between New York City and Buenos Aires, Argentina. You can visit her online at beatrizvidal.com.

This feature require that you enable JavaScript in your browser.
END_OF_DOCUMENT_TOKEN_TO_BE_REPLACED

This feature require that you enable JavaScript in your browser.
END_OF_DOCUMENT_TOKEN_TO_BE_REPLACED

This feature require that you enable JavaScript in your browser.
END_OF_DOCUMENT_TOKEN_TO_BE_REPLACED