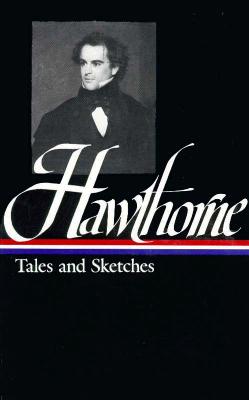 This is book number 1 in the Library of America Nathaniel Hawthorne Edition series.

This Library of America volume offers what no reader has ever been able to find—an authoritative edition of all the tales and sketches of Nathaniel Hawthorne in a single comprehensive volume. Everything is included from his three books of stories, Twice-told Tales (1837, revised 1851), Mosses from an Old Manse (1846, 1854), and The Snow-Image, and Other Twice-told Tales (1851), and from his two books of stories for children based on classical myths, A Wonder Book for Girls and Boys (1852) and Tanglewood Tales (1853)—along with sixteen stories not found in any of these volumes.

The stories are arranged, as they never have been in any other edition, in the order of their periodical publication. Readers of Hawthorne will thereby get a unique sense of how he became one of the most powerful and experimental writers of American fiction.

Here are many familiar but always surprising works like “Young Goodman Brown,” “Wakefield,” “The Birth-mark,” “The Artist of the Beautiful,” “Rappaccini’s Daughter,” and “Ethan Brand.” And here, too, are many others that deserve to be better known, like:
• “Roger Malvin’s Burial,” a suspenseful story of guilt and parricide;
• “The May-Pole of Merry Mount,” where the chances for human love are perilously suspended between the silken license of the revelers and the iron rectitude of the Puritans;
• the masterly tale “My Kinsman, Major Molineux,” full of the pains and terrors of national and familial separations, the severing of the ties of blood and culture that united the colonies to England;
• and the exquisite little story “The Wives of the Dead,” about the ambiguities of love and loss, in which, as so often in Hawthorne, the reader at the end is left in a kind of awe at the multiple possibilities of meaning.

To read these stories is to understand anew why Hawthorne is a great artist and an astonishingly contemporary one.

Nathaniel Hawthorne was born on July 4, 1804, in Salem, Massachusetts, the son and grandson of proud New England seafarers. He lived in genteel poverty with his widowed mother and two young sisters in a house filled with Puritan ideals and family pride in a prosperous past. His boyhood was, in most respects, pleasant and normal. In 1825 he was graduated from Bowdoin College, Brunswick, Maine, and he returned to Salem determined to become a writer of short stories. For the next twelve years he was plagued with unhappiness and self-doubts as he struggled to master his craft. He finally secured some small measure of success with the publication of his Twice-Told Tales (1837). His marriage to Sophia Peabody in 1842 was a happy one. The Scarlet Letter (1850), which brought him immediate recognition, was followed by The House of the Seven Gables (1851). After serving four years as the American Consul in Liverpool, England, he traveled in Italy; he returned home to Massachusetts in 1860. Depressed, weary of writing, and failing in health, he died on May 19, 1864, at Plymouth, New Hampshire.

This feature require that you enable JavaScript in your browser.
END_OF_DOCUMENT_TOKEN_TO_BE_REPLACED

This feature require that you enable JavaScript in your browser.
END_OF_DOCUMENT_TOKEN_TO_BE_REPLACED

This feature require that you enable JavaScript in your browser.
END_OF_DOCUMENT_TOKEN_TO_BE_REPLACED