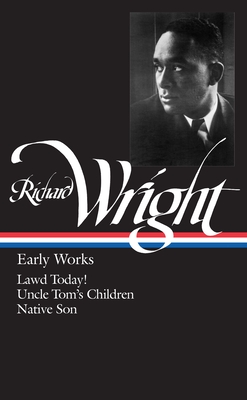 This is book number 1 in the Library of America Richard Wright Edition series.

Native Son exploded on the American literary scene in 1940. The story of Bigger Thomas, a young black man living in the raw, noisy, crowded slums of Chicago’s South Side, captured the hopes and yearnings, the pain and rage of black Americans with an unprecedented intensity and vividness. The text printed in this volume restores the changes and cuts—including the replacement of an entire scene—that Wright was forced to make by book club editors who feared offending their readers. The unexpurgated version of Wright’s electrifying novel shows his determination to write honestly about his controversial protagonist. As he wrote in the essay “How ‘Bigger’ Was Born,” which accompanies the novel: “I became convinced that if I did not write Bigger as I saw and felt him, I’d be acting out of fear.”

This volume also contains Wright’s first novel, Lawd Today!, published posthumously in 1963, and his collection of stories, Uncle Tom’s Children, which appeared in 1938. Lawd Today! interweaves news bulletins, songs, exuberant wordplay, and scenes of confrontation and celebration into a kaleidoscopic chronicle of the events of one day—February 12—in the life of a black Chicago postal worker. The text for this edition reinstates Wright’s stylistic experiments, and the novel emerges as a far livelier work of the imagination.

Uncle Tom’s Children first brought Wright to national attention when it received the Story Prize for the best work submitted to the Federal Writers’ Project. The characters in these tales struggle to survive the cruelty of racism in the South, as Wright asks “what quality of will must a Negro possess to live and die with dignity in a country that denied his humanity.” All five stories Wright included in the 1940 second edition are published in this volume, along with his sardonic autobiographical essay “The Ethics of Living Jim Crow.”

Richard Wright was “forged in injustice as a sword is forged,” wrote Ernest Hemingway. With passionate honesty and courage, he confronted the terrible effects of prejudice and intolerance and created works that explore the deepest conflicts of the human heart.

This Library of America edition presents for the first time Wright’s works in the form in which he intended them to be read. The authoritative new texts, based on Wright’s original typescripts and proofs, reveal the full range and power of his achievement as an experimental stylist and as a fiery prophet of the tragic consequences of racism in American society. The volume includes notes on significant changes in Wright’s text and a detailed chronology of his life.

Richard Wright (1908-1960) is one of the most influential African American writers of the last century. His major works include the story collection Uncle Tom's Children, the novel Native Son, and the autobiography Black Boy.

This feature require that you enable JavaScript in your browser.
END_OF_DOCUMENT_TOKEN_TO_BE_REPLACED

This feature require that you enable JavaScript in your browser.
END_OF_DOCUMENT_TOKEN_TO_BE_REPLACED

This feature require that you enable JavaScript in your browser.
END_OF_DOCUMENT_TOKEN_TO_BE_REPLACED