The Profits of Failure: For-Profit Colleges and the Closing of the Conservative Mind (Paperback) 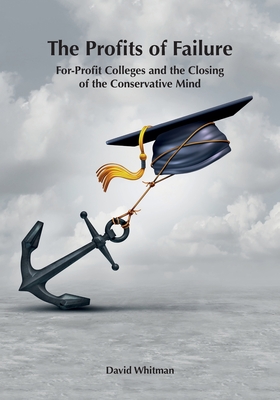 Most of us know little about for-profit colleges, in part because they're widely viewed as the "second-class citizens" of higher education. Parents dream of sending their kids to an Ivy League school, a flagship research university, their alma mater, or a regional NCAA powerhouse, but not of sending their children to a for-profit college. That's a mistaken bias. Each year, good for-profit colleges train thousands to work as medical assistants, business administrators, RNs, cosmetologists-jobs that can change their lives. Bad for-profit colleges, however, leave many thousands of students in debt and jobless. The federal government heavily subsidizes for-profit colleges, so regulation could determine the fate of billions of taxpayer dollars and is therefore of interest to all of us-we're helping fund those colleges, including the disreputable ones. Typically, the students who attend for-profit colleges are among America's most vulnerable: single moms, disadvantaged adults, veterans, minority students, and mid-career employees looking to better their lives. The worst scandal in higher education is the subpar training that so many of them receive at inadequate for-profit institutions. The 2019 college-admissions bribery scandal pales beside the injustices that countless adults suffer at the hands of low-performing and predatory schools. In 2019, three such college chains closed a total of eighty campuses midsemester, stranding 32,000 students just partway through their courses. After years of sacrifice and hard work, they faced trying to complete their degrees at other institutions-if they could find any that would accept their credits-or canceling their federal loans and starting their career education all over again. Since 2016, nearly 300,000 students have filed to have their loans forgiven, alleging that their for-profit colleges defrauded them. What could our government do to limit such abuses? The Profits of Failure offers a definitive answer.

This feature require that you enable JavaScript in your browser.
END_OF_DOCUMENT_TOKEN_TO_BE_REPLACED

This feature require that you enable JavaScript in your browser.
END_OF_DOCUMENT_TOKEN_TO_BE_REPLACED

This feature require that you enable JavaScript in your browser.
END_OF_DOCUMENT_TOKEN_TO_BE_REPLACED