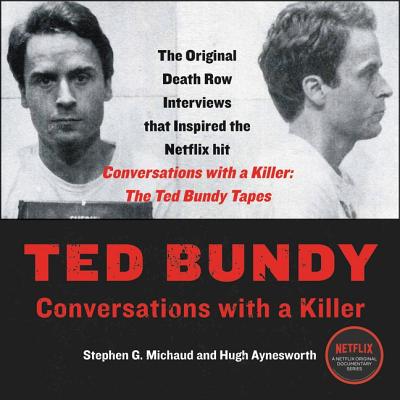 Presented for the first time in audio format, the chilling transcript of Stephen G Michaud and Hugh Aynesworth's interviews with notorious serial killer Ted Bundy, as seen on the hit Netflix documentary series Conversation with a Killer: The Ted Bundy Tapes--based on their New York Times bestselling book.

Handsome and educated, Ted Bundy killed scores of women during the 1970s, eventually confessing to thirty murders committed over seven states between 1974 and 1978. In 1979, much to the surprise of the nation, Bundy made the bold decision to represent himself in the Chi Omega murder case, thinking that his intelligence and enigmatic charm could best the prosecution. He was convicted, however, and was incarcerated on death row in Florida State Prison. After he exhausted all appeals, Bundy spoke to detectives, confessing to other homicides he committed across several states. He had already spoken frankly about himself, his victims, and his crimes to famed journalists Stephen G. Michaud and Hugh Aynesworth.

Thirty years later, thanks to the combination of an unlikely killer, a sensational murder trial (featuring Bundy acting as his own attorney), and a series of Death Row interviews that represented the dynamics of any extraordinary psychological profile, this prolific serial killer continues to intrigue and haunt the American popular imagination. Yet as Netflix's sensational show reveals, an old case is never as preserved as it may seem.

Presented in audio format for the first time, Ted Bundy: Conversations with a Killer provides shocking insights into the killer's 11th-hour confessions before his death in a Florida electric chair in January 1989. Drawn from more than 150 hours of exclusive tape-recorded interviews with Bundy in 1980 by Michaud and Aynesworth--in which the veteran journalist used a psychological tactic to get Bundy talking in the third person-this audiobook, voiced by a cast of narrators, is a harrowing portrait of a serial killer's final reckoning and the two journalists trying to understand the psychology behind the darkness.

This feature require that you enable JavaScript in your browser.
END_OF_DOCUMENT_TOKEN_TO_BE_REPLACED

This feature require that you enable JavaScript in your browser.
END_OF_DOCUMENT_TOKEN_TO_BE_REPLACED

This feature require that you enable JavaScript in your browser.
END_OF_DOCUMENT_TOKEN_TO_BE_REPLACED