A House Among the Trees: A Novel (Hardcover) 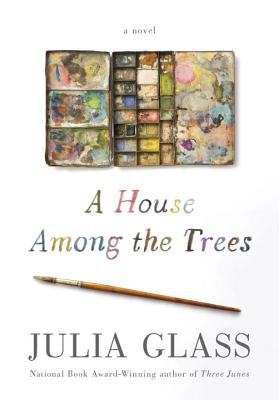 In Julia Glass's fifth book since her acclaimed novel Three Junes won the National Book Award, she gives us the story of an unusual bond between a world-famous writer and his assistant—a richly plotted novel of friendship and love, artistic ambition, the perils of celebrity, and the power of an unexpected legacy.

When the revered children's book author Mort Lear dies accidentally at his Connecticut home, he leaves his property and all its contents to his trusted assistant, Tomasina Daulair, who is moved by his generosity but dismayed by the complicated and defiant directives in his will. Tommy knew Morty for more than four decades, since meeting him in a Manhattan playground when she was twelve and he was working on sketches for the book that would make him a star. By the end of his increasingly reclusive life, she found herself living in his house as confidante and helpmeet, witness not just to his daily routines but to the emotional fallout of his strange boyhood and his volatile relationship with a lover who died of AIDS. Now Tommy must try to honor Morty's last wishes while grappling with their effects on several people, including Dani Daulair, her estranged brother; Meredith Galarza, the lonely, outraged museum curator to whom Lear once promised his artistic estate; and Nicholas Greene, the beguiling British actor cast to play Mort Lear in a movie.

When the actor arrives for the visit he had previously arranged with the man he is to portray, he and Tommy are compelled to look more closely at Morty's past and the consequences of the choices they now face, both separately and together. Morty, as it turns out, made a confession to Greene that undermines much of what Tommy believed she knew about her boss—and about herself. As she contemplates a future without him, her unlikely alliance with Greene—and the loyalty they share toward the man whose legacy they hold in their hands—will lead to surprising upheavals in their wider relationships, their careers, and even their search for love.

JULIA GLASS is the author of five previous books of fiction, including the best-selling Three Junes, winner of the National Book Award, and I See You Everywhere, winner of the Binghamton University John Gardner Fiction Book Award. Other published works include the Kindle Single Chairs in the Rafters and essays in several anthologies. A recipient of fellowships from the National Endowment for the Arts, the New York Foundation for the Arts, and the Radcliffe Institute for Advanced Study, Glass is a Distinguished Writer in Residence at Emerson College. She lives with her family in Marblehead, Massachusetts.

“Gripping and evocative . . . Glass is a formidable storyteller.” —The Washington Book Review

“A House Among the Trees shows [Glass] at her tender, compassionate, thoughtful, best, thinking about art, about life, and the way they intertwine so beautifully to make us, finally, fully human.” —Susan Larson, The New Orleans Advocate

“Spell-binding . . . Elegant and character-driven . . . Glass accomplishes her task with a fresh vision and little fuss, depicting the complexity not just of creativity, but also how ‘sensitivity . . . is not the same as compassion.’” —Kathleen Rooney, Chicago Tribune

“A lovely meditation on the mysteries of creativity and its costs, not just to creators, but to those who surround them . . . Avoiding clichés about tortured, exploitative genius, Glass crafts a thoughtful, warm-hearted tale about the choices each of us makes, with consequences inevitably both good and bad . . . It’s a pleasure to be in the hands of a consummate storyteller.” —Wendy Smith, The Boston Globe

“Enthralling . . . Glass is a master at withholding information until just the right moment.” —Robert Allen Papinchak, The National Book Review

“Glass [is] an astute observer of relationships and master of dialogue.” —Ellen Emry Heltzel, The Seattle Times

“A fascinating look at a world in which a creative artist becomes a hot property to be both honored and exploited . . . A compelling story with fully realized characters.” —Michael Cart, Booklist (starred review)

“Since her first novel, Three Junes, Glass has explored family dynamics of all kinds with a warm, yet never sentimental sympathy. She excels at bringing her many characters to life and at imagining vivid scenes from the rarified world of art and entertainment in this excellent new book.” —Library Journal

This feature require that you enable JavaScript in your browser.
END_OF_DOCUMENT_TOKEN_TO_BE_REPLACED

This feature require that you enable JavaScript in your browser.
END_OF_DOCUMENT_TOKEN_TO_BE_REPLACED

This feature require that you enable JavaScript in your browser.
END_OF_DOCUMENT_TOKEN_TO_BE_REPLACED