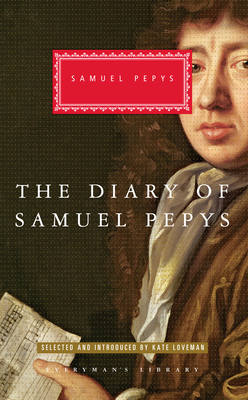 By Samuel Pepys, Kate Loveman (Selected by)
$30.00
On Our Shelves Now

A newly edited selection from the most famous, colorful, and vivid diarist in the English language--in the most accessible, uncensored, and clearly annotated edition available.

Though he rose to become the most powerful administrator in King Charles II's navy, when Samuel Pepys began writing his secret journal in 1660 he was just a young clerk living in London. Over the next nine years, he became eyewitness to some of the most significant events in seventeenth-century English history, among them, the Restoration, the Great Plague of London in 1665, and the Great Fire of London in 1666. Pepys's diary gives vivid descriptions of spectacular events, but much of the richness of the work lies in the details it provides about the minor dramas of daily life. While Pepys was keen to hear the king's views, he was also always ready to talk with a soldier, a housekeeper, or a child rag-picker. He records with searing frankness his tumultuous personal life, including his marriage, infidelities, ambitions, and power schemes. He recounts with relish all the latest scandals, and reflects his voracious delight in music, food, books, scientific discoveries, and fashion. The result is a lively, often astonishing diary and an unrivaled account of life in seventeenth-century London.

SAMUEL PEPYS (1633-1703) was an administrator of England's navy and a member of Parliament who is most famous for the diary that he kept for a decade.

KATE LOVEMAN is Associate Professor in English Literature at the University of Leicester. She is the author of Reading Fictions, 1660-1740: Deception in English Literary and Political Culture and of Samuel Pepys and His Books: Reading, Newsgathering, and Sociability, 1660-1703. Her other publications include articles on book history, eighteenth-century novels, and the introduction of chocolate into England.

"Pepys led a full, varied and voraciously-enjoyed life and clearly took pleasure in setting it all down in plain words. Unlike most frantically busy men, he had remarkable powers of observation."
--Paul Johnson

"The bald truth about oneself, what we are all too timid to admit when we are not too dull to see it, that was what Pepys saw clearly and set down unsparingly."
--Robert Louis Stevenson

"Alexander conquered the world; but Pepys, with a keener, more selfish understanding of life, conquered a world for every sense."
--Charles Whibley

This feature require that you enable JavaScript in your browser.
END_OF_DOCUMENT_TOKEN_TO_BE_REPLACED

This feature require that you enable JavaScript in your browser.
END_OF_DOCUMENT_TOKEN_TO_BE_REPLACED

This feature require that you enable JavaScript in your browser.
END_OF_DOCUMENT_TOKEN_TO_BE_REPLACED