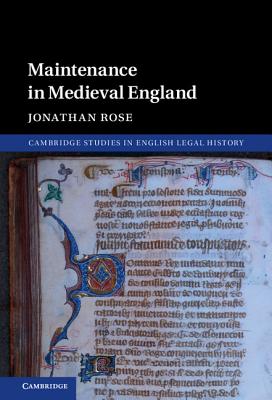 This is the first book covering those who abused and misused the legal system in medieval England and the initial attempts of the Anglo-American legal system to deal with these forms of legal corruption. Maintenance, in the sense of intermeddling in another person's litigation, was a source of repeated complaint in medieval England. This book reveals for the first time what actually transpired in the resultant litigation. Extensive study of the primary sources shows that the statutes prohibiting maintenance did not achieve their objectives because legal proceedings were rarely brought against those targeted by the statutes: the great and the powerful. Illegal maintenance was less extensive than frequently asserted because medieval judges recognized a number of valid justifications for intermeddling in litigation. Further, the book casts doubt on the effectiveness of the statutory regulation of livery. This is a treasure trove for legal historians, literature scholars, lawyers, and academic libraries.

This feature require that you enable JavaScript in your browser.
END_OF_DOCUMENT_TOKEN_TO_BE_REPLACED

This feature require that you enable JavaScript in your browser.
END_OF_DOCUMENT_TOKEN_TO_BE_REPLACED

This feature require that you enable JavaScript in your browser.
END_OF_DOCUMENT_TOKEN_TO_BE_REPLACED