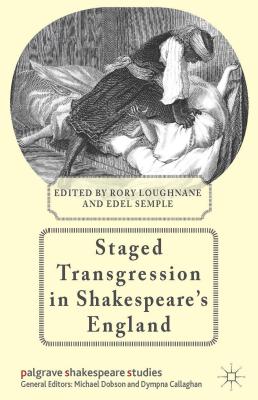 Staged Transgression in Shakespeare's England is a groundbreaking collection of seventeen essays, drawing together leading and emerging scholars to discuss and challenge critical assumptions about the transgressive nature of the early modern English stage. These essays shed new light on issues of gender, race, sexuality, law and politics.

Rory Loughnane is Associate Editor of the New Oxford Shakespeare at Indiana University-Purdue University Indianapolis. He has previously worked at Trinity College Dublin, where he held an IRCHSS Postdoctoral Fellowship, and Syracuse University, where he was a Visiting Assistant Professor of Early Modern Literature. He is the editor of Late Shakespeare, 1608-1613 (2012) with Andrew J. Power, Celtic Shakespeare: the Bard and the Borderers (2013) with Willy Maley, and The Yearbook of English Studies for 2014, dedicated to Caroline Literature, with Andrew J. Power and Peter Sillitoe.Edel Semple is Lecturer in Shakespeare Studies in the School of English at University College Cork, Ireland. She has previously worked at University College Dublin (UCD), where she was a Teaching Fellow in Renaissance Literature. Edel held a Government of Ireland IRCHSS postgraduate scholarship in UCD and received her PhD for a thesis on representations ofwhoredom in early modern drama, prose, and polemic. She is currently preparing a series of articles based on this research and on her recent studies of early modern drama and Shakespeare on film.

This feature require that you enable JavaScript in your browser.
END_OF_DOCUMENT_TOKEN_TO_BE_REPLACED

This feature require that you enable JavaScript in your browser.
END_OF_DOCUMENT_TOKEN_TO_BE_REPLACED

This feature require that you enable JavaScript in your browser.
END_OF_DOCUMENT_TOKEN_TO_BE_REPLACED