Modern Hindu Traditionalism in Contemporary India: The Sri Ma?h and the Jagadguru Ramanandacarya in the Evolution of the Ramanandi Sampradaya (Routledge Hindu Studies) (Hardcover) 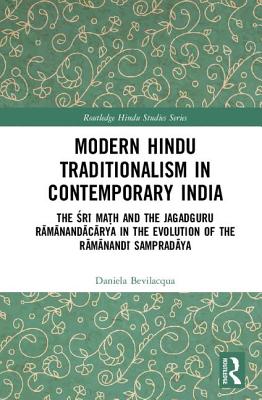 Modern Hindu Traditionalism addresses Hindu traditions that resisted contact with both Neo-Hindu thought and views of "classical" Hinduism perceived to be outmoded.

This book provides an in-depth understanding of Modern Hindu Traditionalism through the case study of the Rāmānandī order (sampradāya) and the portrait of the Jagadguru Rāmānandācārya Rāmnareśācārya. This guru belongs to the ancient tradition of the Rāmānandī order, which is active at the present time and the biggest Vaiṣṇava religious order in Northern India. Analyzing the historical evolution of the Rāmānandī order, the author shows how different centers have undergone different changes over the centuries, and focuses on the independence struggle of a group of Rāmānandīs from the Rāmānūjīs, which led to the creation of the role of Jagadguru Rāmānandācārya and the construction of the Śrī Maṭh. Drawing on extensive fieldwork, this book casts light on figures and processes central to the development of Hinduism in the twentieth and twenty-first century and consequently describes the role of religion in contemporary Indian society. The author examines the role religious institutions and their leaders have in the everyday life of individuals, how they interact with and in the society, and how they approach and interpret social and political issues. The Rāmānandīs' use of new methods of communication, in particular social media, is an innovative part of the study.

A welcome innovation in the studies of South Asian religion, this book will be of interest to historians, anthropologists, and scholars of Hinduism and religion and politics.

Daniela Bevilacqua received her PhD from the University of Rome, Sapienza, Italy in co-tutoring with the Paris Nanterre University. She is currently a Postdoctoral Research Fellow involved in the Haṭha Yoga Project at the School of Oriental and African Studies, University of London, UK.

This feature require that you enable JavaScript in your browser.
END_OF_DOCUMENT_TOKEN_TO_BE_REPLACED

This feature require that you enable JavaScript in your browser.
END_OF_DOCUMENT_TOKEN_TO_BE_REPLACED

This feature require that you enable JavaScript in your browser.
END_OF_DOCUMENT_TOKEN_TO_BE_REPLACED