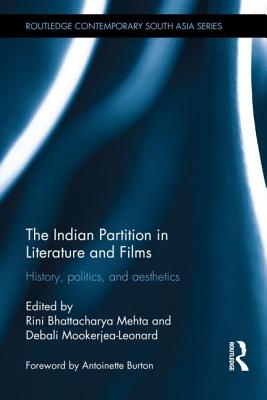 This book presents an examination of fictional representations, in books and films, of the 1947 Partition that led to the creation of the sovereign nation-states of India and Pakistan. While the process of representing the Partition experience through words and images began in the late 1940s, it is only in the last few decades that literary critics and film scholars have begun to analyse the work.

The emerging critical scholarship on the Partition and its aftermath has deepened our understanding of the relationship between historical trauma, collective memory, and cultural processes, and this book provides critical readings of literary and cinematic texts on the impact of the Partition both in the Punjab and in Bengal. The collection assembles studies on Anglophone writings with those on the largely unexplored vernacular works, and those which have rarely found a place in discussions on the Partition. It looks at representations of women's experiences of gendered violence in the Partition riots, and how literary texts have filled in the lack of the 'human dimension' in Partition histories. The book goes on to highlight how the memory of the Partition is preserved, and how the creative arts' relation to public memory and its place within the public sphere has changed through time. Collectively, the essays present a nuanced understanding of how the experience of violence, displacement, and trauma shaped postcolonial societies and subjectivities in the Indian subcontinent.

Mapping the diverse topographies of Partition-related uncertainties and covering both well-known and lesser-known texts on the Partition, this book will be a useful contribution to studies of South Asian History, Asian Literature and Asian Film.

Rini Bhattacharya Mehta is Assistant Professor of Comparative Literature and of Religion at the University of Illinois, USA. Mehta's teaching interests cover both literature and cinema. Her edited volume Bollywood and Globalization was published in 2010; she is currently working on a monograph on Indian cinema. Her articles have been published in Comparative Studies in South Asia, Africa, and the Middle East, South Asian History and Culture, and Comparative American Studies.Debali Mookerjea-Leonard is currently Associate Professor of English and World Literature at James Madison University in Virginia, USA. She is a member of the editorial board of Genders. Her recently completed book is titled The Paradox of Independence: Literature, Gender, and the Trauma of Partition. She has contributed to anthologies, and journals including the Journal of Commonwealth Literature, Feminist Review, and Social Text.

This feature require that you enable JavaScript in your browser.
END_OF_DOCUMENT_TOKEN_TO_BE_REPLACED

This feature require that you enable JavaScript in your browser.
END_OF_DOCUMENT_TOKEN_TO_BE_REPLACED

This feature require that you enable JavaScript in your browser.
END_OF_DOCUMENT_TOKEN_TO_BE_REPLACED