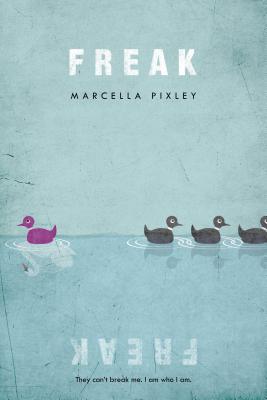 By Marcella Pixley
$14.99
usually available in 5-10 days
(This is a special order book which cannot be returned.)

For Miriam Fisher, a budding poet who reads the Oxford English Dictionary for fun, seventh grade is a year etched in her memory "clear as pain." That's the year her older sister, Deborah, once her best buddy and fellow "alien," bloomed like a beautiful flower and joined the high school in-crowd. That's the year high school senior Artie Rosenberg, the "hottest guy in the drama club" and, Miriam thinks, her soul mate, comes to live with Miriam's family. And that's the year the popular "watermelon girls" turn up the heat in their cruel harassment of Miriam—ripping her life wide open in shocking, unexpected ways. Teased and taunted in school, Miriam is pushed toward breaking, until, in a gripping climax, she finds the inner strength to prove she's a force to be reckoned with.

This riveting first novel introduces readers to an unforgettable heroine, an outsider who dares to confront the rigid conformity of junior high, and in the process manages not only to save herself but to inspire and transform others.

“* Observant and tough, Miriam's voice has a knife edge that tears past the surface. ” —Publishers Weekly, starred review

“Middle school girls will read this book and realize how many girls are just like them.” —VOYA

“Pixley writes with well-crafted intensity of a girl in an agony of perplexed exclusion. . . . Readers will be intrigued by her eventual ability to make a new way for herself.” —The Bulletin of Center for Children's Books, starred review

“Skillful use of first-person narrative and figurative language make the novel very readable for persons ages twelve and up.” —IRA

This feature require that you enable JavaScript in your browser.
END_OF_DOCUMENT_TOKEN_TO_BE_REPLACED

This feature require that you enable JavaScript in your browser.
END_OF_DOCUMENT_TOKEN_TO_BE_REPLACED

This feature require that you enable JavaScript in your browser.
END_OF_DOCUMENT_TOKEN_TO_BE_REPLACED