The Heart Broke In: A Novel (Paperback) 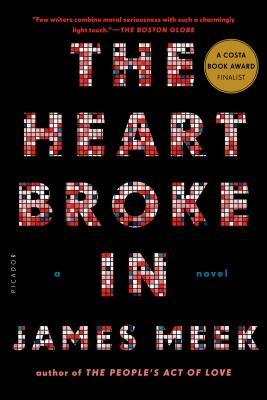 A RICHLY IMAGINED NOVEL OF FAMILY, LOVE AND SCIENCE SET IN MODERN-DAY LONDON, FROM THE INTERNATIONALLY BESTSELLING AUTHOR OF THE PEOPLE'S ACT OF LOVE

Ritchie Shepherd, aging former pop star and wildly successful producer of a reality teen talent show, is starting to trip over the intricacy of his own lies. Gallingly, his sister, Bec, a scientist developing a crucial vaccine, is as addicted to truth-telling as Ritchie is to falsehood. Ritchie relies on her certitude even as he seethes with resentment. A devastating chain of events is set into motion when Bec tells her fiancé, Val, a powerful tabloid editor, that she can't bring herself to marry him after all. Furious, he sets into motion an elaborate revenge plot intended to destroy Bec by exposing the people who are close to her.

A bighearted epic in the manner of Tolstoy, James Meek's The Heart Broke In is also as shrewd, starkly funny, and of-the-moment as Jonathan Franzen's Freedom or Jeffrey Eugenides's The Marriage Plot. Most of all, it is a staggeringly good read, fiction with the reverberating resonance of truth.

James Meek is an award-winning writer whose novels include The People’s Act of Love and We Are Now Beginning Our Descent. He lives in London.

“[The Heart Broke In is] a novel to sink yourself into on a Sunday afternoon, disappearing into the characters' lives and worries and wants, and learning a little about immorality and immortality (the words are cousins), both thoughtfully explored.” —The Seattle Times

“You have to admire the scope and ambition of this operatic saga.” —The Guardian (London)

This feature require that you enable JavaScript in your browser.
END_OF_DOCUMENT_TOKEN_TO_BE_REPLACED

This feature require that you enable JavaScript in your browser.
END_OF_DOCUMENT_TOKEN_TO_BE_REPLACED

This feature require that you enable JavaScript in your browser.
END_OF_DOCUMENT_TOKEN_TO_BE_REPLACED