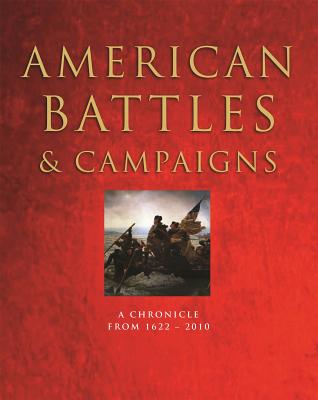 Raids and sieges; trench warfare and air campaigns; guerrilla warfare, naval engagements, and colonial wars—American Battles & Campaigns covers every major campaign and battle fought in North America or by United States’ forces overseas, from the Pequot War of 1634 to the recent conflicts in Afghanistan and Iraq.

Arranged chronologically, American Battles & Campaigns: A Chronicle, from 1622-Present includes hundreds of entries, ranging from the 1770 Boston Massacre through the Alamo (1836) and the Philippine-American War (1899–1902), to Chateau-Thierry (1918), Midway (1942) and Hue (1969). Major battles, such as Yorktown, Gettysburg, Pearl Harbor, and D-Day, are illustrated with full-color annotated 3-dimensional maps and detailed text explaining the course of the engagement. Stuffed with black and white and color photographs, battle maps, paintings and other artwork, American Battles & Campaigns contains expert accounts and analysis from thirty leading military historians.

Dr. Chris McNab is an experienced specialist in wilderness and urban survival techniques. He has published over 20 books including: How to Survive Anything, Anywhere -- an encyclopedia of military and civilian survival techniques for all environments -- Special Forces Endurance Techniques, First Aid Survival Manual, and The Handbook of Urban Survival. In his home country of Wales, UK, Chris provides instruction on wilderness hunting techniques and he is also an experienced martial arts instructor.

This feature require that you enable JavaScript in your browser.
END_OF_DOCUMENT_TOKEN_TO_BE_REPLACED

This feature require that you enable JavaScript in your browser.
END_OF_DOCUMENT_TOKEN_TO_BE_REPLACED

This feature require that you enable JavaScript in your browser.
END_OF_DOCUMENT_TOKEN_TO_BE_REPLACED