The Bells of Old Tokyo: Meditations on Time and a City (Hardcover) 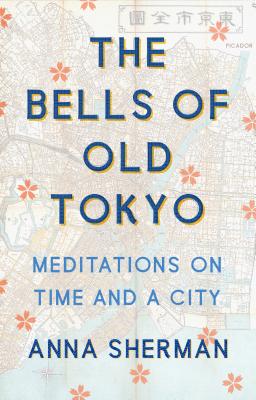 An elegant and absorbing tour of Tokyo and its residents

From 1632 until 1854, Japan’s rulers restricted contact with foreign countries, a near isolation that fostered a remarkable and unique culture that endures to this day. In hypnotic prose and sensual detail, Anna Sherman describes searching for the great bells by which the inhabitants of Edo, later called Tokyo, kept the hours in the shoguns’ city.

An exploration of Tokyo becomes a meditation not just on time, but on history, memory, and impermanence. Through Sherman’s journeys around the city and her friendship with the owner of a small, exquisite cafe, who elevates the making and drinking of coffee to an art-form, The Bells of Old Tokyo follows haunting voices through the labyrinth that is the Japanese capital: an old woman remembers escaping from the American firebombs of World War II. A scientist builds the most accurate clock in the world, a clock that will not lose a second in five billion years. The head of the Tokugawa shogunal house reflects on the destruction of his grandfathers’ city: “A lost thing is lost. To chase it leads to darkness.”

The Bells of Old Tokyo marks the arrival of a dazzling new writer who presents an absorbing and alluring meditation on life in the guise of a tour through a city and its people.

ANNA SHERMAN was born in Little Rock, Arkansas. She studied Greek and Latin at Wellesley College and Oxford before moving to Tokyo in 2001. The Bells of Old Tokyo is her first book.

"A completely extraordinary book, unlike anything I have read before. At once modest in tone and vast in scale and ambition, The Bells of Old Tokyo extends in all directions, delicately wrought, precise, unfaltering, lucid and strange as a dream. I haven’t felt so excited about an investigation into place since I first read Rings of Saturn. Like Sebald, Sherman is concerned with war, brutality, nostalgia and loss, but her search for the meaning of time is also radiant and absolutely humane."--Olivia Laing, author of Crudo and The Lonely City

“A meditative exploration of time and change...Tokyo’s past, although often physically erased by fires or constant demolition and construction in a nation that prizes change and modernization—is movingly excavated and evoked in this unusual book....Sherman is a profoundly evocative writer.”—Heller McAlpin, The Wall Street Journal

"[A] spiritual memoir, which weaves between personal storytelling...and oral and mythical histories of the old neighborhoods of Tokyo....The author's own layered process mirrors the city's complexity, nonlinearity, and frozen beauty. The bells were not always easy to find, but Sherman was determined, and she successfully brings into focus their elusive stories, which point to an appealing past in a city that has moved rapidly into the future. "--Kirkus Reviews

"The Bells of Old Tokyo is an elegant series of musings, a beautifully written evocation of a place and a philosophical inquiry into the nature of time itself. Sherman has given the world, and one city in particular, an astonishing gift."--Julia Kastner, Shelf Awareness (Starred review)

"A special book. Every sentence, every thought Sherman has, every question she asks, every detail she notices, offers something. The Bells of Old Tokyo is a gift....It is a masterpiece."--The Spectator [UK]

“Sherman’s writing is elegant and accessible, and the story of Tokyo quickly becomes the story of time itself’”—Uproxx, "Best Books of Summer 2019"

“The Bells of Old Tokyo is part personal memoir, part cultural history, but wholly unique. The fragile, fragmentary poetry of its prose so beautifully captures the transience of Tokyo time, the constant cycle of destruction and reconstruction, and the nostalgia for that which has been lost and yet wonder at all that remains to be found. It is the best book I have read about Tokyo written this century.”—David Peace, author of Tokyo Year Zero

“In her haunting, beautiful debut travel narrative, Anna Sherman takes the reader along on her quest to find the bells of old Tokyo, illuminating a lost world hidden in plain sight…The Bells of Old Tokyo is an ambitious attempt to mirror that map, or is, rather, Sherman’s description of it. And it succeeds.” —South China Morning Post

"A fascinating portrait of a city and its people, epic and intimate at the same time."--The Weekly Times (AUS)


“Good travel writing is often hard to come by - it’s a delicate balance of bringing a destination to life while also informing of its noteworthy aspects, but Anna Sherman does so flawlessly.”—Japan Today

“Only a handful could match Sherman for respectful curiosity, detailed knowledge and sensitivity to her surroundings.”—Canberra Times (Australia)


“A reading treasure... A work of literary art... Magnificent both in its content and in the exquisite, lyrical writing of its author.”—Cape Times (SA)

“A great book... that is all at once a memoir, a travelogue, a history book, and an examination of what defines a culture and its people... A masterwork.”—Books and Bao (UK)

This feature require that you enable JavaScript in your browser.
END_OF_DOCUMENT_TOKEN_TO_BE_REPLACED

This feature require that you enable JavaScript in your browser.
END_OF_DOCUMENT_TOKEN_TO_BE_REPLACED

This feature require that you enable JavaScript in your browser.
END_OF_DOCUMENT_TOKEN_TO_BE_REPLACED