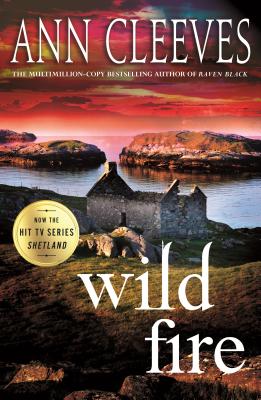 This is book number 8 in the Shetland Island Mysteries series.

"Nothing short of riveting."â€”Louise Penny on Blue Lightning

"Gripping from start to finish."â€”Booklist

The betrayal of those closest burns most of all . . .

Hoping for a fresh start, an English family moves to the remote Shetland islands, eager to give their autistic son a better life.

But when a young nanny's body is found hanging in the barn beside their home, rumors of her affair with the husband spread like wildfire. As suspicion and resentment of the family blazes in the community, Detective Inspector Jimmy Perez is called in to investigate. He knows it will mean his boss, Willow Reeves, returning to run the investigation, and confronting their complex relationship.

With families fracturing and long-hidden lies emerging, Jimmy faces the most disturbing case of his career.

The first Shetland novel, Raven Black, won the CWA Gold Dagger for best crime novel, and Ann was awarded the CWA Diamond Dagger in 2017. She lives in the UK.

"A fantastic end to one of the key detective series of the past decade."â€”Ragnar Jonasson, author of The Darkness

"Intricately plotted and elegantly written, this installment is billed as Perez's final case. Series fans will be sorry to see the last of him."â€”Publishers Weekly (starred)

â€œCompellingâ€¦Throughout the â€œShetland Islandâ€ series, Cleeves lovingly depicts the Scottish island life, and this volume is no exception. Fans may be saddened but certainly not disappointed by this final installment.â€â€”Library Journal (starred)

"The final case in this complex, character-driven series is a tour de force."â€”Kirkus Reviews

"Wild Fire is one of the best books in her long series. It's the perfect end for this complex character wedded to this past and this place."â€”Globe and Mail

Praise for the Shetland Island series:

â€œIn true Christie fashion, Cleeves once more pulls the wool over our eyes with cunning and conviction.â€ â€”Colin Dexter, author of the Inspector Morse series

â€œEvery bit as good as we have come to expect from Cleeves.â€ â€”Reviewing The Evidence

â€œThin Air is perhaps the best and most compelling in the series so far.â€ â€”Curled Up With a Good Book

"Cleeves has an unusually deft hand with characters; not one of them seems purely plot functional, and Perez's characters keeps deepening with each book."â€”Booklist (starred)

"Cleeves is in her element in this extraordinary landscape, with its old croft houses and modern oil fieldsâ€”and water, water everywhere."â€”New York Times Book Review on Dead Water

"Cleeves has an unusually deft hand with characters; not one of them seems purely plot functional, and Perez's characters keeps deepening with each book."â€”Booklist (starred) on Dead Water

This feature require that you enable JavaScript in your browser.
END_OF_DOCUMENT_TOKEN_TO_BE_REPLACED

This feature require that you enable JavaScript in your browser.
END_OF_DOCUMENT_TOKEN_TO_BE_REPLACED

This feature require that you enable JavaScript in your browser.
END_OF_DOCUMENT_TOKEN_TO_BE_REPLACED