The Three Mothers: How the Mothers of Martin Luther King, Jr., Malcolm X, and James Baldwin Shaped a Nation (Paperback) 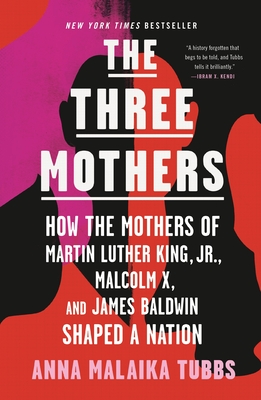 Much has been written about the Berdis Baldwin's son James, about Alberta King's son Martin, and Louise Little's son Malcolm. But virtually nothing has been said about the extraordinary women who raised them, who themselves were all born within six years of each other, all contending with the very specific prejudices faced by Black women during Jim Crow.

Berdis, Alberta, and Louise all possessed an unrelenting belief in education—from Louise asking her children to read to her from the dictionary, to Berdis’s faith and encouragement in her son’s preternaturally gifted writing, to Alberta’s unwavering dedication to Martin’s higher education. These women used their strength and motherhood to push their sons toward greatness, all with a conviction that all human beings deserve dignity and respect despite the rampant racism of the 20th century.

These three mothers taught resistance and a fundamental belief in the worth of black Americans to their sons, even when these beliefs flew in the face of America’s racist practices and led to ramifications for all three families’ safety. The fight for equal justice and dignity came above all else for the three mothers.

These women, their similarities and differences, as individuals and as mothers, represent a piece of history left untold and a celebration of black motherhood long overdue.

Anna Malaika Tubbs is a Cambridge Ph.D. candidate in sociology and a Bill and Melinda Gates Cambridge Scholar. After graduating Phi Beta Kappa from Stanford University with a Bachelor’s degree in anthropology, Anna received a Master’s degree from the University of Cambridge in multidisciplinary gender studies. Outside of the academy she is an educator, Diversity, Equity, and Inclusion consultant, and the First Partner of Stockton, California. She lives with her husband, Michael Tubbs, who is the mayor of Stockton, and their son, Michael Malakai.

This feature require that you enable JavaScript in your browser.
END_OF_DOCUMENT_TOKEN_TO_BE_REPLACED

This feature require that you enable JavaScript in your browser.
END_OF_DOCUMENT_TOKEN_TO_BE_REPLACED

This feature require that you enable JavaScript in your browser.
END_OF_DOCUMENT_TOKEN_TO_BE_REPLACED