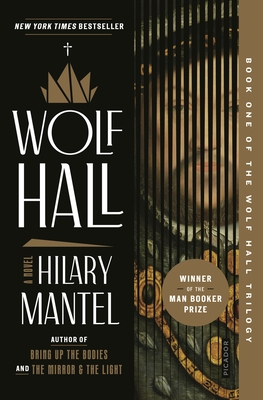 This is book number 1 in the Wolf Hall Trilogy series.

“In Wolf Hall, Mantel offers a new view of the reign of Henry VIII: from inside the head of Thomas Cromwell, as he ponders ways to increase the size of Henry's exchequer and aid the king's efforts to get Anne Boleyn into his bed through the sanctity of marriage. Mantel exposes Cromwell's thoughts as he frets over his family, his friends, even his enemies. A brilliant novel that encapsulates the Tudor era in the lushest of evocative prose.”
— Kathy Ashton, The King's English, Salt Lake City, UT

“In Wolf Hall, Mantel offers a new view of the reign of Henry VIII from inside the head of Thomas Cromwell as he ponders ways to increase the size of Henry's exchequer and aid the king's efforts to get Anne Boleyn into his bed through the sanctity of marriage. Mantel exposes Cromwell's thoughts as he frets over his family, his friends, and even his enemies. This is a brilliant novel that encapsulates the Tudor era in the lush, evocative prose.”
— Kathy Ashton, The King's English, Salt Lake City, UT


England in the 1520s is a heartbeat from disaster. If the king dies without a male heir, the country could be destroyed by civil war. Henry VIII wants to annul his marriage of twenty years and marry Anne Boleyn. The pope and most of Europe opposes him. Into this impasse steps Thomas Cromwell: a wholly original man, a charmer and a bully, both idealist and opportunist, astute in reading people, and implacable in his ambition. But Henry is volatile: one day tender, one day murderous. Cromwell helps him break the opposition, but what will be the price of his triumph?

Hilary Mantel was a renowned English writer who twice won the Booker Prize, for her best-selling novel Wolf Hall and its sequel, Bring Up the Bodies. The final novel of the Wolf Hall trilogy, The Mirror & the Light, debuted at #1 on the New York Times bestseller list and won worldwide critical acclaim. Mantel wrote seventeen celebrated books, including the memoir Giving Up the Ghost, and she was awarded the National Book Critics Circle Award for fiction, the Walter Scott Prize, the Costa Book Award, the Hawthornden Prize, and many other accolades. In 2014, Mantel was appointed Dame Commander of the Order of the British Empire (DBE). She died at age seventy in 2022.

“Hilary Mantel's Wolf Hall is a startling achievement, a brilliant historical novel focused on the rise to power of a figure exceedingly unlikely, on the face of things, to arouse any sympathy at all . . . . This is a novel too in which nothing is wasted, and nothing completely disappears.” —Stephen Greenblatt, The New York Review of Books

“Nothing in the last few years has dazzled me more than Hilary Mantel's Wolf Hall. . . . Magnificent.” —Elizabeth Gilbert, author of Eat, Pray, Love

"Wolf Hall, Hilary Mantel­’s epic fictionalized look at Thomas Cromwell’s rise to power, came out in 2009, but I was a little busy back then, so I missed it. Still great today."—Barack Obama

“On the origins of this once-world-shaking combat, with its still-vivid acerbity and cruelty, Hilary Mantel has written a historical novel of quite astonishing power. . . . With breathtaking subtlety--one quite ceases to notice the way in which she takes on the most intimate male habits of thought and speech--Mantel gives us a Henry who is sexually pathetic, and who needs a very down-to-earth counselor. . . . The means by which Mantel grounds and anchors her action so convincingly in the time she describes, while drawing so easily upon the past and hinting so indirectly at the future, put her in the very first rank of historical novelists. . . . Wolf Hall is a magnificent service to the language and literature whose early emancipation it depicts and also, in its demystifying of one of history's wickedest men, a service to the justice that Josephine Tey first demanded in The Daughter of Time.” —Christopher Hitchens, The Atlantic

“Whether we accept Ms Mantel's reading of history or not, her characters have a lifeblood of their own . . . . a Shakespearean vigour. Stylistically, her fly-on-the-wall approach is achieved through the present tense, of which she is a master. Her prose is muscular, avoiding cod Tudor dialogue and going for direct modern English. The result is Ms Mantel's best novel yet.” —The Economist

“A novel both fresh and finely wrought: a brilliant portrait of a society in the throes of disorienting change, anchored by a penetrating character study of Henry's formidable advisor, Thomas Cromwell. It's no wonder that her masterful book just won this year's Booker Prize . . . [Mantel's prose is] extraordinarily flexible, subtle, and shrewd.” —Wendy Smith, The Washington Post

“A huge book, in its range, ambition . . . in its success. [Mantel's] interest is in the question of good and evil as it applies to people who wield great power. That means anguish, exultation, deals, spies, decapitations, and fabulous clothes . . . She always goes for color, richness, music. She has read Shakespeare closely. One also hears the accents of the young James Joyce.” —Joan Acocella, The New Yorker

“Mantel's abilities to channel the life and lexicon of the past are nothing short of astonishing. She burrows down through the historical record to uncover the tiniest, most telling details, evoking the minutiae of history as vividly as its grand sweep. The dialogue is so convincing that she seems to have been, in another life, a stenographer taking notes in the taverns and palaces of England.” —Ross King, Los Angeles Times

“Darkly magnificent . . . Instead of bringing the past to us, her writing, brilliant and black, launches us disconcertingly into the past. We are space-time travelers landed in an alien world . . . history is a feast whose various and vital excitements and intrigues make the book a long and complex pleasure.” —Richard Eder, The Boston Globe

“Arch, elegant, richly detailed . . . [Wolf Hall's] main characters are scorchingly well rendered. And their sharp-clawed machinations are presented with nonstop verve in a book that can compress a wealth of incisiveness into a very few well-chosen words . . . Deft and diabolical as they are, Ms. Mantel's slyly malicious turns of phrase . . . succinctly capture the important struggles that have set her characters talking.” —Janet Maslin, The New York Times

“Brilliant . . . A provocative, beautifully written book that ends much too soon.” —The Plain Dealer (Cleveland)

“The essential Mantel element . . . is a style--of writing and of thinking--that combines steely-eyed intelligence with intense yet wide-ranging sympathy. This style implies enormous respect for her readers, as if she believes that we are as intelligent and empathetic as she is, and one of the acute pleasures of reading her books is that we sometimes find ourselves living up to those expectations. . . . If you are anything like me, you will finish Wolf Hall wishing it were twice as long as its 560 pages. Torn away from this sixteenth-century world, in which you have come to know the engaging, pragmatic Cromwell as if he were your own brother--as if he were yourself--you will turn to the Internet to find out more about him . . . But none of this, however instructive will make up for your feeling of loss, because none of this additional material will come clothed in the seductive, inimitable language of Mantel's great fiction.” —Wendy Lesser, Bookforum

“Mantel sets a new standard for historical fiction with her latest novel Wolf Hall, a riveting portrait of Thomas Cromwell . . . Mantel's crystalline style, piercing eye and interest in, shall we say, the darker side of human nature, together with a real respect for historical accuracy, make this novel an engrossing, enveloping read.” —BookPage

“The story of Cromwell's rise shimmers in Ms. Mantel's spry intelligent prose . . . [Mantel] leaches out the bones of the story as it is traditionally known, and presents to us a phantasmagoric extravaganza of the characters' plans and ploys, toils and tactics.” —Washington Times

“Historical fiction at its finest, Wolf Hall captures the character of a nation and its people. It exemplifies something that has lately seemed as mythical as those serpent princesses: the great English novel.” —Bloomberg News

“Inspired . . . there are no new stories, only new ways of telling them. Set during Henry VIII's tumultuous, oft-covered reign, this epic novel . . . proves just how inspired a fresh take can be. [Mantel] is an author as audacious as Anne [Boleyn] herself, imagining private conversations between public figures and making it read as if she had a glass to the wall.” —People Magazine (four stars, People Pick)

“[Mantel] wades into the dark currents of 16th century English politics to sculpt a drama and a protagonist with a surprisingly contemporary feel . . . Wolf Hall is sometimes an ambitious read. But it is a rewarding one as well.” —Marjorie Kehe, The Christian Science Monitor

“This masterwork is full of gems for the careful reader. The recurring details alone . . . shine through like some kind of Everyman's poetry. Plainspoken and occasionally brutal, Wolf Hall is both as complex and as powerful as its subject, as messy as life itself.” —Clea Simon, The Boston Phoenix

“Reader, you're in excellent hands with Hilary Mantel . . . for this thrumming, thrilling read. . . . Part of the delight of masterfully paced Wolf Hall is how utterly modern it feels. It is political intrigue pulsing with energy and peopled by historical figures who have never seemed more alive--and more human.” —Ellen Kanner, Miami Herald

“Wolf Hall is a solid historical novel that's also a compelling read . . . Mantel's narrative manages to be both rich and lean: there's plenty of detail, but it's not piled in endless paragraphs. The plot flows swiftly from one development to the next.” —David Loftus, The Oregonian

“[Mantel] seamlessly blends fiction and history and creates a stunning story of Tudor England . . . . With its excellent plotting and riveting dialogue, Wolf Hall is a gem of a novel that is both accurate and gripping.” —Cody Corliss, St. Louis Post-Dispatch

“[A] spirited novel . . . . Mantel has a solid grasp of court politics and a knack for sharp, cutting dialogue.” —Thom Geier, Entertainment Weekly

“This is in all respects a superior work of fiction, peopled with appealing characters living through a period of tense high drama‚There will be few novels this year as good as this one.” —Library Journal, starred review

“Mixing fiction with fact, Mantel captures the atmosphere of the times and brings to life the important players.” —Publishers Weekly

This feature require that you enable JavaScript in your browser.
END_OF_DOCUMENT_TOKEN_TO_BE_REPLACED

This feature require that you enable JavaScript in your browser.
END_OF_DOCUMENT_TOKEN_TO_BE_REPLACED

This feature require that you enable JavaScript in your browser.
END_OF_DOCUMENT_TOKEN_TO_BE_REPLACED