The Daughter of Auschwitz: My Story of Resilience, Survival and Hope (Hardcover) 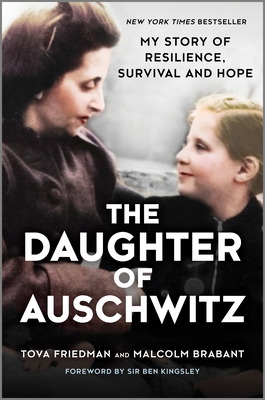 WITH A FOREWORD BY SIR BEN KINGSLEY


A powerful memoir by one of the youngest survivors of Auschwitz, Tova Friedman, following her childhood growing up during the Holocaust and surviving a string of near-death experiences in a Jewish ghetto, a Nazi labor camp, and Auschwitz.

"I am a survivor. That comes with a survivor's obligation to represent one and half million Jewish children murdered by the Nazis. They cannot speak. So I must speak on their behalf."

Tova Friedman was one of the youngest people to emerge from Auschwitz. After surviving the liquidation of the Jewish ghetto in Central Poland where she lived as a toddler, Tova was four when she and her parents were sent to a Nazi labour camp, and almost six when she and her mother were forced into a packed cattle truck and sent to Auschwitz II, also known as the Birkenau extermination camp, while her father was transported to Dachau.

During six months of incarceration in Birkenau, Tova witnessed atrocities that she could never forget, and experienced numerous escapes from death. She is one of a handful of Jews to have entered a gas chamber and lived to tell the tale.

As Nazi killing squads roamed Birkenau before abandoning the camp in January 1945, Tova and her mother hid among corpses. After being liberated by the Russians they made their way back to their hometown in Poland. Eventually Tova's father tracked them down and the family was reunited.

In The Daughter of Auschwitz, Tova immortalizes what she saw, to keep the story of the Holocaust alive, at a time when it's in danger of fading from memory. She has used those memories that have shaped her life to honour the victims. Written with award-winning former war reporter Malcolm Brabant, this is an extremely important book. Brabant's meticulous research has helped Tova recall her experiences in searing detail. Together they have painstakingly recreated Tova's extraordinary story about the world's worst ever crime.

This feature require that you enable JavaScript in your browser.
END_OF_DOCUMENT_TOKEN_TO_BE_REPLACED

This feature require that you enable JavaScript in your browser.
END_OF_DOCUMENT_TOKEN_TO_BE_REPLACED

This feature require that you enable JavaScript in your browser.
END_OF_DOCUMENT_TOKEN_TO_BE_REPLACED