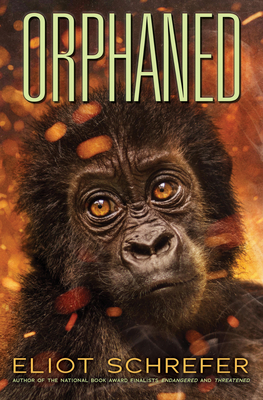 This is book number 4 in the Ape Quartet series.

In National Book Award finalist Endangered, Eliot Schrefer showed a human's first encounter with an ape. Now comes this astonishing story of a family of gorillas' first encounter with a human.Before humans, and before human history, there were the apes.Snub is a young gorilla, living in the heart of what will eventually be known as Africa. She is jealous of her mother's new baby . . . and restless in her need to explore. When a natural disaster shakes up her family, Snub finds herself as the guardian of her young sibling . . . and lost in a reshaped world.Snub may feel orphaned, but she is not alone. There are other creatures stalking through the woods -- a new form of predator, walking on two legs. One of their kind is also orphaned, and is taken in by Snub. But the intersection of the human world and the gorilla world will bring both new connections and new battles.In his boldest work yet, two-time National Book Award finalist Eliot Schrefer shows us a riveting, heartbreaking early encounter between ape and man -- told from the ape's point of view. It is a journey unlike any other in recent literature.

Eliot Schrefer's Endangered and Threatened were named as finalists for the National Book Award. He is also the author of Rescued, The Deadly Sister, The School for Dangerous Girls, Glamorous Disasters, and The New Kid. He lives in New York City. Visit him online at eliotschrefer.com.

This feature require that you enable JavaScript in your browser.
END_OF_DOCUMENT_TOKEN_TO_BE_REPLACED

This feature require that you enable JavaScript in your browser.
END_OF_DOCUMENT_TOKEN_TO_BE_REPLACED

This feature require that you enable JavaScript in your browser.
END_OF_DOCUMENT_TOKEN_TO_BE_REPLACED