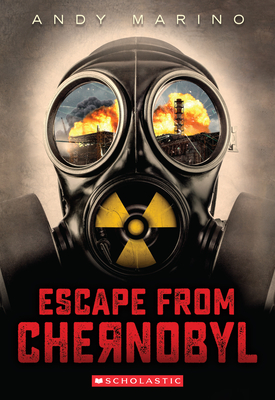 Alina & Lev are two siblings living in Pripyat, one of the Soviet Union's proud nuclear cities. Both are asleep in their beds.

Their cousin, Yuri, is a custodian at the Chernobyl Nuclear Power Plant, where he's fiercely attacking a spill in the hallway with a mop.

Alina's best friend, Sofiya, sleeps just a few doors down. Her father is an engineer at the plant, a fact that has always filled her with pride.

In five minutes, Reactor No. 4 will explode in a ball of fire. It will expel radiation across their town for nine days before it's finally contained. For the people of Pripyat, it will be far too late.

Two young siblings flee the Chernobyl disaster with their parents, but the Communist party is on their heels. Meanwhile, the friends and family they were forced to leave behind must contend with a disinformation campaign that's determined to pretend nothing is wrong-even as deadly radiation spills into the air.

Andy Marino was born and raised in upstate New York. He spent his childhood orchestrating Lego pirate battles, drawing detailed maps of imaginary video games, and cheating death in Choose Your Own Adventure books. Profoundly influenced by the work of J.R.R. Tolkien, Andy started writing his first novel at the age of eleven. Tragically, THE RUNES OF ILLIARM was never completed. For books that were, visit Andy online at andy-marino.com.

This feature require that you enable JavaScript in your browser.
END_OF_DOCUMENT_TOKEN_TO_BE_REPLACED

This feature require that you enable JavaScript in your browser.
END_OF_DOCUMENT_TOKEN_TO_BE_REPLACED

This feature require that you enable JavaScript in your browser.
END_OF_DOCUMENT_TOKEN_TO_BE_REPLACED