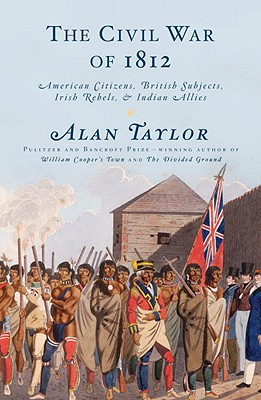 In this deeply researched and clearly written book, the Pulitzer Prize–winning historian Alan Taylor tells the riveting story of a war that redefined North America. During the early nineteenth century, Britons and Americans renewed their struggle over the legacy of the American Revolution. Soldiers, immigrants, settlers, and Indians fought in a northern borderland to determine the fate of a continent. Would revolutionary republicanism sweep the British from Canada? Or would the British empire contain, divide, and ruin the shaky American republic?

In a world of double identities, slippery allegiances, and porous boundaries, the leaders of the republic and of the empire struggled to control their own diverse peoples. The border divided Americans—former Loyalists and Patriots—who fought on both sides in the new war, as did native peoples defending their homelands. Serving in both armies, Irish immigrants battled one another, reaping charges of rebellion and treason. And dissident Americans flirted with secession while aiding the British as smugglers and spies.

During the war, both sides struggled to sustain armies in a northern land of immense forests, vast lakes, and stark seasonal swings in the weather. In that environment, many soldiers panicked as they fought their own vivid imaginations, which cast Indians as bloodthirsty savages. After fighting each other to a standstill, the Americans and the British concluded that they could safely share the continent along a border that favored the United States at the expense of Canadians and Indians. Both sides then celebrated victory by forgetting their losses and by betraying the native peoples.

A vivid narrative of an often brutal (and sometimes comic) war that reveals much about the tangled origins of the United States and Canada.

Born and raised in Maine, Alan Taylor teaches American and Canadian history at the University of California, Davis. His books include The Divided Ground, Writing Early American History, American Colonies, and William Cooper’s Town, which won the Bancroft and Pulitzer prizes for American history. He also serves as a contributing editor to The New Republic.

“Easily the most sophisticated book ever written about a conflict that is often either neglected or seriously misunderstood. . . . Taylor’s discussions of diplomatic and political maneuvering are woven with military set-pieces into a powerful narrative. . . . [This] book affirms his gifts for prodigious research.”
—The Wall Street Journal

“Credit Taylor with blowing most of the dust off America’s most forgotten war. This is history with a capital H.”
—The Seattle Times

“A truly spellbinding narrative. Unlike other books on the War of 1812, [Taylor’s] is about the hearts and minds of the people who planned it, fought it and lived through it. Almost every page brings a revelation.”
—The Toronto Star

“In this deeply researched and clearly written book, [Taylor] tells the riveting story of a war that redefined North America.”
—The Washington Times

“Comprehensive. . . . Taylor’s account of a land war that roughly divided people with a common culture and heritage provides a new dimension for an understanding of 1812.”
—The Boston Globe

“Taylor gives a fascinating account of the war and shows its importance to the fragile new republic in a book filled with stories about the people who instigated, commanded and fought in the conflict.”
—The Associated Press

“Taylor serves up a corrective in [this] fact-laden account. . . . Nicely captures the confusion of a ‘minor’ war with major consequences.”
—­The Newark Star-Ledger

“Taylor’s beautifully written book offers a War of 1812 that’s no longer an insignificant afterthought to the American Revolution, but its final, decisive act.”
—Maclean’s

“As is his talented wont, Taylor puts the war into perspective, positing that it redefined the North American continent.”
—Asbury Park Press (New Jersey)

“Thoroughly researched. . . . Taylor illuminates an arena generally omitted from military histories of the war. Battles and campaigns do connect his account, however, which will stand history collections in good stead for a very long while.”
—Booklist


From the Trade Paperback edition.

This feature require that you enable JavaScript in your browser.
END_OF_DOCUMENT_TOKEN_TO_BE_REPLACED

This feature require that you enable JavaScript in your browser.
END_OF_DOCUMENT_TOKEN_TO_BE_REPLACED

This feature require that you enable JavaScript in your browser.
END_OF_DOCUMENT_TOKEN_TO_BE_REPLACED